A tiny $7.5M capped ASX stock has just trumped a field of contenders to secure hotly sought after ground in the Youanmi gold province of WA.

In case you missed the buzz on Youanmi, Spectrum Metals (ASX:SPX) put the region on the map in a big way over the course of 2019 – delivering stellar returns for shareholders as it extended the mineralisation present on its ground: 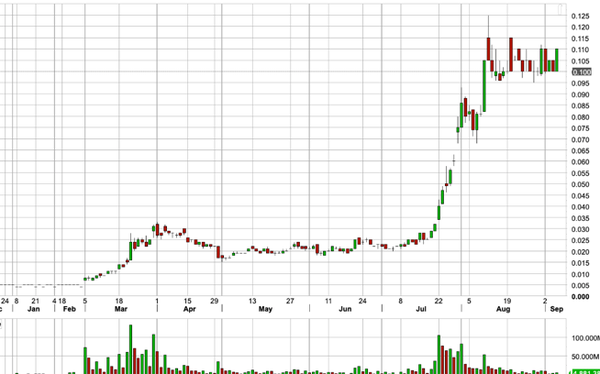 Today Spectrum towers over the region with a $152M market cap and 11c share price – 9 months ago it was a shell, priced at half a cent...

For those lucky early investors that held on, the company has delivered a 2200% return.

But today we aren’t here to tell you about Spectrum – that ship has already sailed for small cap stock investors looking for exposure to large returns.

A tiny $7.5M capped stock has just come out of trading halt with news of a planned acquisition of advanced exploration ground next door to $152M capped SPX.

This battery metals and gold explorer has an extremely tight capital structure, with just 52 million shares on issue after its recent $650,000 placement.

The company is set to acquire tenements literally next door to Spectrum.

In fact the same shear hosting Spectrum’s Penny West mineralisation continues south into this stock’s soon to be acquired ground.

Let’s cut to the chase and take you through the potential of this company making deal: 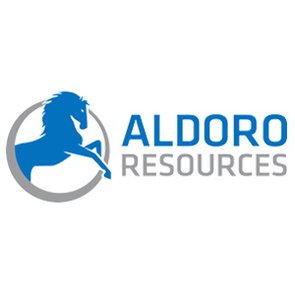 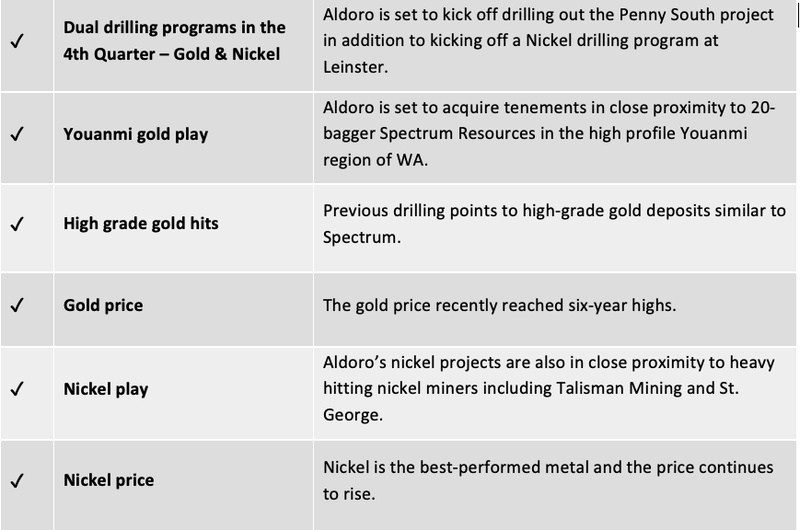 Nickel is blitzing the metals market at the moment, so it is no surprise Aldoro Resources’ (ASX:ARN) share price has seen gains of its own recently, rising over 16% in the last month.

Its nickel plays are along strike of much bigger companies with similar numbers.

However, not content with being just a nickel explorer, Aldoro wants to further reward shareholders by diversifying into another metal of the moment – gold.

These projects give the company exposure to two of the hottest performing metals, as well as exposure to the growing mood for battery and renewable energy metals.

Looking at gold specifically, it is the gold acquisition that will see this company unveil what could be a game changing gold project, a new top-notch management team and the cash to fulfil its drilling ambitions.

Aldoro Resources (ASX:ARN) has moved into gold, seizing an opportunity to lay claim to ground with close proximity to Spectrum Metals.

Spectrum has been one of the stars of 2019, rising from a cap of just $5 million to a current worth of $152 million. Much of the investor attraction is due to its Penny West Gold Project, where the Penny North prospect, which was discovered in March, has rapidly grown in stature due to its high-grade core.

Given Penny West produced 85,000 ounces of gold grading at 21.8g/t gold during its heyday in early 1990s, the excitement surrounding Spectrum is understandable.

Aldoro is moving in next door to Spectrum and has signed a Term Sheet to acquire 100% of Altilium Metals Limited, which holds a series of advanced exploration projects in the Murchison Region of Western Australia including the Penny South Gold Project in the Youanmi Gold Mining District and the multi-commodity Narndee Project Area.

Aldoro is acquiring all the shares in Atilium Metals Limited in exchange for 10.8 million Aldoro shares in addition to undertaking a single tranche placement at a premium to the current Aldoro share price which will raise $650,000 and take Aldoro’s cash reserves to circa $4 million in cash.

When we say next door to Spectrum, we mean right next door.

The average depth of historic drilling within Penny South is less than 40m down hole, which means there could be a lot of upside for Aldoro as it drills further down.

Spectrum has reported outstanding recent exploration success at Penny North and at the southern end of the Penny West pit within deeper drill holes beneath cover.

Aldoro will use its funds to utilise a similar exploration strategy to test surface anomalies at depth.

Expect the Penny South drilling program (potentially October) to begin shortly and a flurry of news to follow.

So near, yet not so far

Whilst we have concentrated on its proximity and similarity to Spectrum, the underexplored Youanmi region has been kind to other explorers.

Those who have been following Next Small Cap over the past few years, know that we have been covering the stock since 2017.

Here is the company’s performance since we started our coverage. 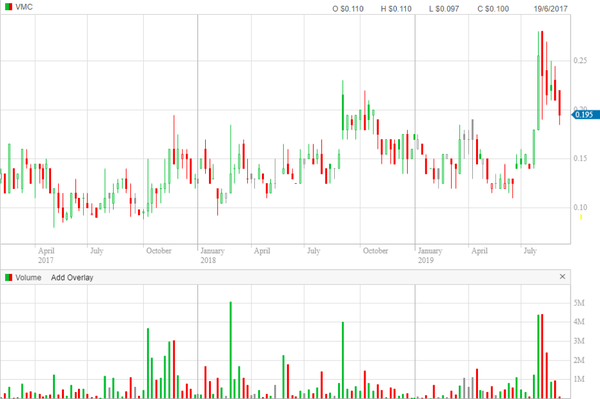 This year has been the start of what could be a transformational time for the company as our previous article ASX Junior’s WA Gold Play Could Prove Transformational attests.

Finfeed has also been tracking Venus heavily. You can read the latest news in the following article: 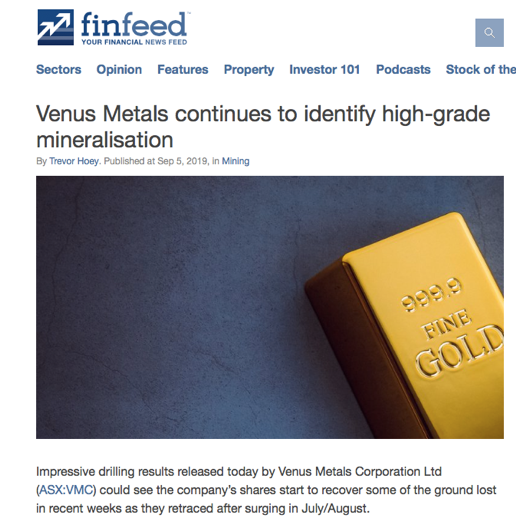 Venus has climbed from a $15 million market cap to $22 million since April this year, and while the share price retraced slightly recently, its latest news has again seen it rise.

Aldoro will be looking to move just as quickly, if not quicker than Venus.

One further stock to look at in the area is Rox Resources (ASX:RXL), which has jumped 275% in the last six months.

Rox and Venus have history. They are Joint Venture partners in the 1.2Moz Youanmi Gold Mine.

For Aldoro, nearology again plays an important part in its nickel assets, with one project being close to St George Mining’s Mt Alexander project and another to Talisman Mining’s Sinclair Nickel Project and BHP’s Leinster Nickel Operations. We’ll get to those shortly, but first let’s have a look at what is driving the nickel price up.

A Nickel for your thoughts

Nickel is the metal of the moment as you can see by the chart below. 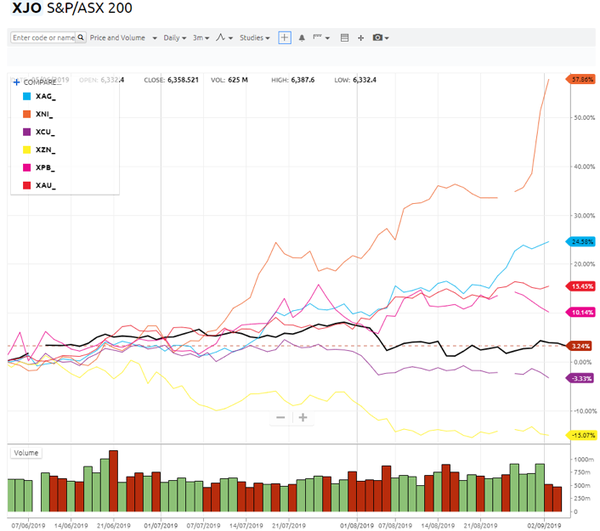 It is clearly outperforming other metals.

“The Australian nickel miners are benefiting from a combination of strength in the nickel price and weakness in the AUD/USD. We note that spot nickel in A$ is now approaching A$12.00/lb, and is ~50% and ~30% higher than our FY20 and FY21 forecasts respectively.”

Whilst, Aldoro will no longer be a pure nickel play, its nickel assets are solid and do place the company in a strong position with regard to macro events. Wood Mackenzie is predicting a substantial nickel supply crunch in the mid-2020s, due to dwindling global stockpiles and scarce supply.

Moreover, the recent surge in the nickel price from to $US16,690/t (A$24,611/t) was triggered by Indonesia’s on-again, off-again nickel export policy.

Also having an impact is the Electric Vehicle (EV) revolution. As you can see by the chart below, nickel is the most popular metal used in EVs. 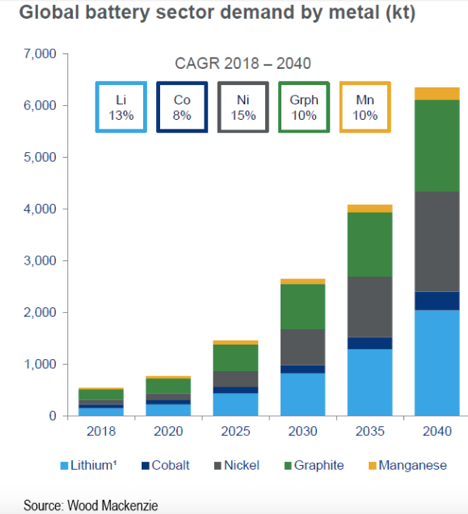 That’s great news for nickel explorers and producers as according to Wood Mackenzie, total passenger EV sales, including hybrid electric vehicles (HEV), were up by over 24% last year and by 2025 global electric car sales (with a plug) will account for 7% of all passenger car sales, 14% by 2030 and 38% by 2040. Plus, NMC 811 cells are being produced on a greater scale resulting in increased nickel demand at the expense of cobalt and lithium and most automotive manufacturers plan to go completely electric by 2050.

Aldoro has been in the nickel space for some time, so what assets is the company sitting on?

Cathedral’s Belt was the subject of the company’s most recent news. It targets Ni-Cu-Co mineralisation in similar settings to the $67 million capped St George Mining Ltd’s (ASX:SGQ) neighbouring Mt Alexander Project, which has had considerable success.

Aldoro’s is to the East of St George’s Mt Alexander project, with the bigger company recently announcing a new nickel copper discovery in Cathedral’s Belt, which confirms the potential for nickel sulphide mineralisation in the region.

Aldoro is now getting ready to commence drilling at Leinster in the next few weeks, ground work at Cathedral’s Belt, comprising field investigations and surface geochemical and geophysical surveys, similar to those found to be effective by St George.

Aldoro will be busy in September with a drill program expected to begin this month at its Leinster Nickel Project.

The subject will be the Firefly Prospect, where drilling will test a series of bedrock conductors modelled within an intense, 1km scale electromagnetic (EM) anomaly which appears to be associated with the contact of a high magnetic response unit.

The strength of this anomaly implies it is likely to have a high conductance and therefore a higher probability of a result of accumulations of sulphide minerals. 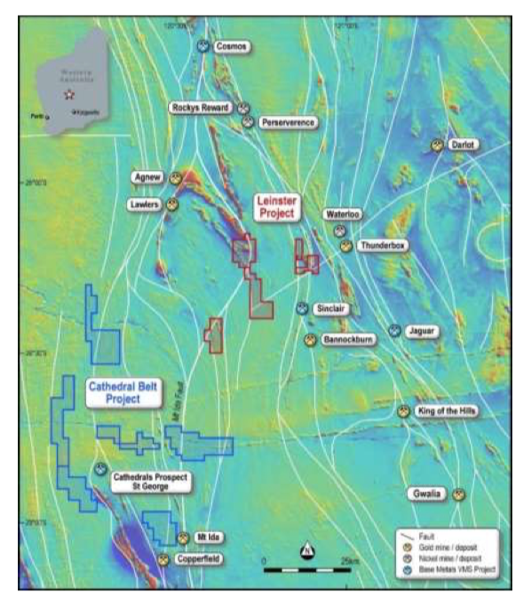 Clearly Aldoro is in good company, including a fast growing Aussie explorer and an Australian mining behemoth.

Drilling contractors have been engaged and drilling is expected to begin in mid-September – just a couple of weeks away. 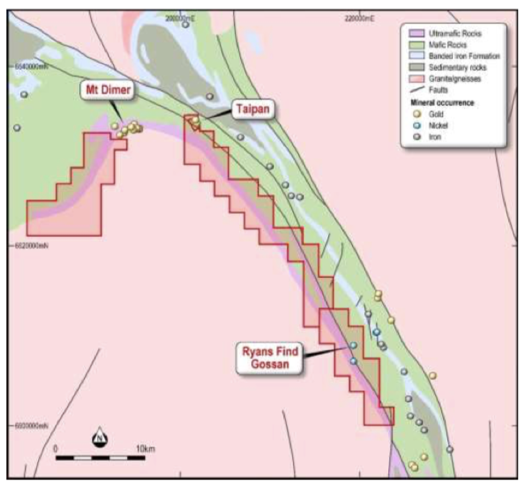 Aldoro is now focused on the nickel sulphide potential of the Ryan’s Find Project and would be buoyed by historical exploration conducted by WMC and Breakaway Resources, which culminated in nickel sulphide focused drilling by Neometals (ASX:NMT).

The final piece of the nickel puzzle is Kalgirin, where Aldoro is currently designing a geochemical sampling program, following the detection of elevated Ni-Co results in its first pass survey.

Once again, Kalgirin has popular neighbours and is located along trend from Golden Mile Resources’ Quicksilver Nickel-Cobalt Project. Last year, Golden Mile identified new EM targets along strike from the Quicksilver Project, which is an encouraging sign for the potential of Aldoro’s Kalgarin Project to host Ni-Co mineralisation.

Whilst work continues on its nickel projects, Aldoro is excited by what its new gold acquisition has to offer shareholders.

Situated in an underexplored, but highly prospective region in the Youanmi Gold Belt, Aldoro’s new ground could have enormous potential.

Its neighbours are already benefitting from the fruits of their exploration labour. Rox is up, Venus is up and, the company with whom it shares ground, Spectrum Metals, is up over 2000% and has lifted its market cap from $5 million to over $150 million in a matter of months.

Aldoro is onto something here.

Once the acquisition of Altilium is complete, Aldoro will commence a drilling program at Leinster, followed up by drilling operations commencing at Penny South, and we’ll soon know just how close to Spectrum the company really is.