2017 has been a significant year of positive change for ASX small-cap, Zinc of Ireland (ASX:ZMI).

The company zeroed in on its highly prospective Kildare MVT Zinc Project in central Ireland, a country which holds some of the richest zinc real estate in tonnes per kilometre in the world.

It’s also home to a cluster of high-grade mines like Navan, Lisheen, Galmoy and Tynagh. This European base metals explorer is really only just starting out, and yet the latest development in its court looks like it could transform the Kildare project’s entire outlook.

ZMI’s recent diamond drilling at Kildare has confirmed multiple zones of exceptionally high-grade zinc mineralisation in the shallower regions of both the McGregor and Celtic Tiger prospects.

Further to that, assays from McGregor, including 3.11 metres at 19.6% lead and zinc from 205.4 metres and 11.35 metres at 6.1% zinc and lead from 238 metres, confirm that shallow mineralisation has developed adjacent to the recently discovered McGregor Fault.

These impressive results translate into a number of high-impact implications for ZMI.

To begin with, this confirms the high prospectivity of the Celtic Tiger discovery, where drilling continues as we speak.

It also suggests strong potential to upgrade the current Inferred Resource, which stands as is at 5.2 million tonnes at 8.6% combined zinc and lead – already one of the biggest zinc Resource estimates in the ASX zinc junior corridor.

And from an exploration standpoint, the presence of shallower and more accessible mineralisation also means quicker and cheaper drilling as ZMI undertakes future financial modelling for Kildare.

All in all, recent results mean serious business for a tiny ASX stock looking to shake up increasingly discordant zinc supply/demand dynamics.

However this is an early stage play, so any investors considering this stock for their portfolio should seek professional financial advice for further information.

As we’ve quickly realised, ZMI is the kind of exploration story that ticks all the vital boxes. By all accounts, this company is in the right place, at the right time, and it’s looking for the right stuff.

Also rubbing shoulders with ZMI in Kildare is some of the world’s leading zinc players, including Boliden AB (STO: BOL) and Teck Resources (TSE:TECK.B).

On top of all of this, zinc supplies are dwindling, and spot prices are soaring. LME zinc stockpiles are at 12-year lows, and a 54% price gain since last year puts the highly sought after metal at 10-year highs.

So the $9.8 million-capped ZMI is clearly a strategic zinc play with an impeccable sense of timing.

Alongside this most recent glowing news, Phase 3 of ZMI’s diamond drilling is currently afoot. This is a multi-pronged program designed to extend the Base of Reef mineralisation at McGregor, and to follow up on ZMI’s previous intercepts of shallow mineralisation at both McGregor and Celtic Tiger.

The coming weeks are looking to be chock-full for ZMI, and we expect a steady flow of news for this ASX zinc junior. Three holes are expected to be completed at Celtic Tiger by Christmas, it is still funded for the next phase of drilling in 2018 and a JORC upgrade is also on its way... to name only a few of the potential share price catalysts on ZMI’s radar.

Without further ado, we re-acquaint you with:

The latest on the Kildare front

As became clear to us since we first introduced you to Zinc of Ireland (ASX:ZMI) back in July last year , this is very much a news flow-driven story.

And the last few months have proven to be no exception, with a stream of regular updates indicating that things have been progressing steadily and consistently across ZMI’s oeuvre .

ZMI has also recently raised funds to the tune of $2.33 million to underpin its Phase 3 drilling program at Kildare, which we’ll look at in a moment.

Taking a moment to set the scene, Ireland is a premier zinc jurisdiction, with a stable, eminently mining-friendly government and low corporate taxes... 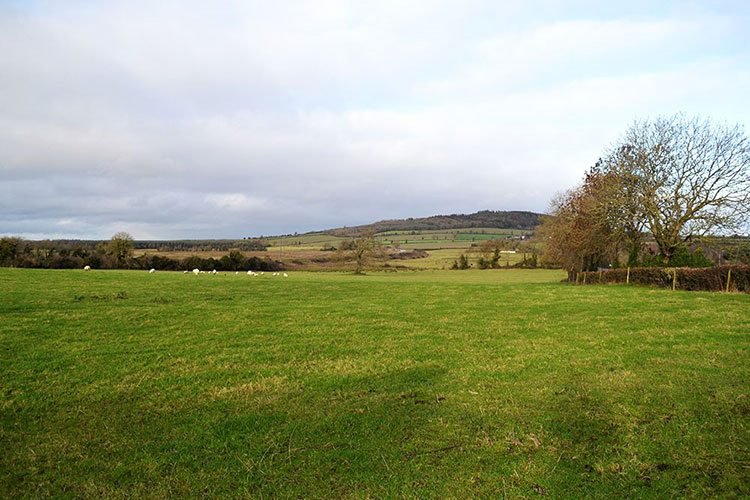 It’s also the world’s tenth largest zinc producer, and given its proximity to active industrial hubs in nearby regions, ZMI will be in an ideal position to supply nearby markets should it manage to develop a commercially viable project.

As we may have already mentioned, Kildare is 80 kilometres along strike from Lisheen, and also neighbours major zinc players Boliden and Teck.

In the map below, you can see ZMI’s strategic location (its projects are marked out in red), as well as its close proximity to these zinc heavyweights: 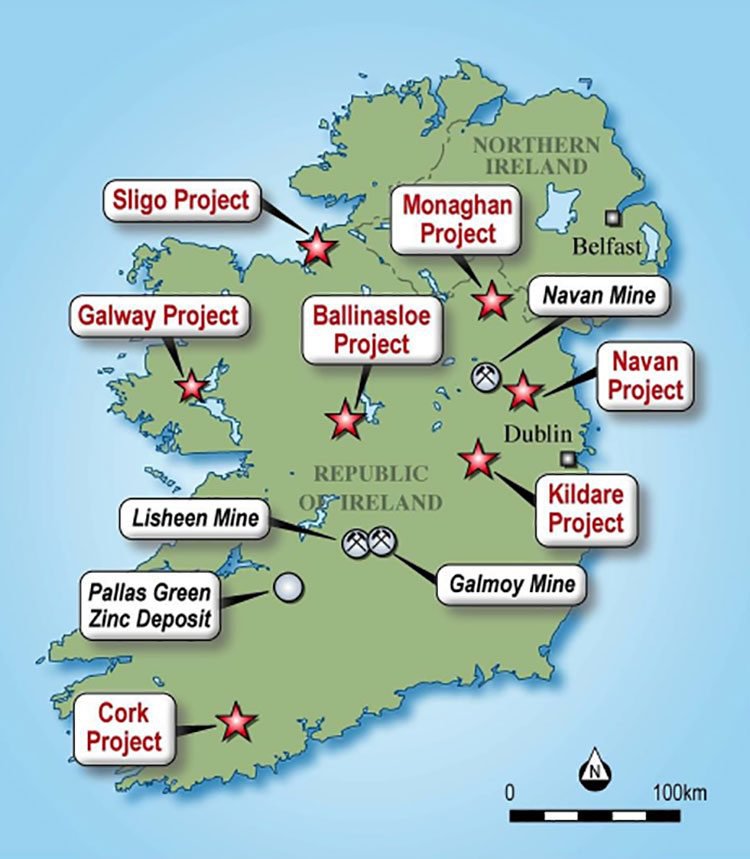 ZMI revealed its most recent exploration results on the Kildare front in early November. This was clearly met with shareholder approval.

This update (and the transpiring share price lift) was covered in detail on the day by Finfeed .com ( a related entity of S3 Consortium Pty Ltd as defined in Section 9 of the Corporations Act 200. ): 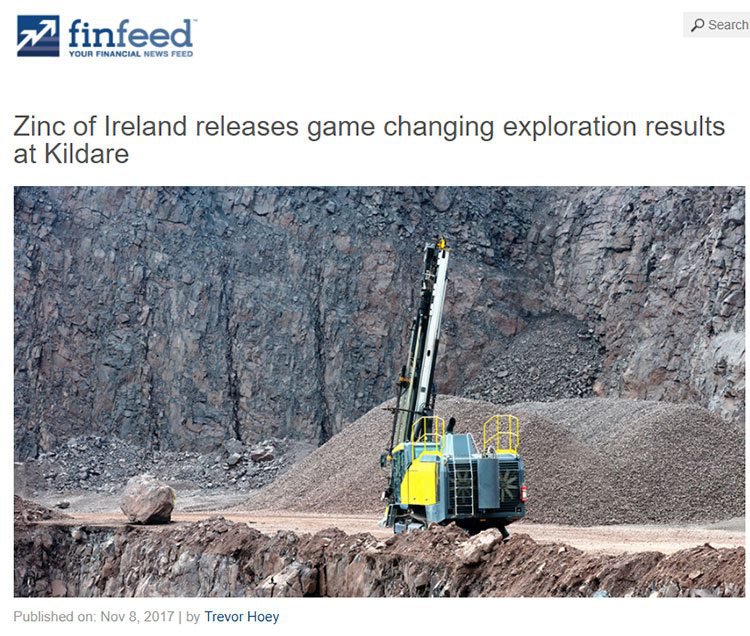 As mentioned, ZMI’s recent diamond drilling program at Kildare has confirmed multiple zones of extremely high-grade zinc mineralisation in the shallower regions of the McGregor and Celtic Tiger prospects.

Of particular interest are the assay results from the recently completed diamond drill holes, Z_4069_006 (006), Z_4069_007 (007), and Z_4069_008 (008), which clearly demonstrate the potential for shallower mineralisation at Kildare. In turn, this transforms the outlook for the project, significantly upgrading its discovery and growth potential.

The reported drill holes each intersected multiple zones of mineralisation relating to faulting, brecciation and veining, including zones of massive sulphide development.

For those of you who don’t have PhDs in geological science, this is very favourable geology we’re talking about. The key takeaway here is that discovery of thick, high-grade zinc mineralisation within a couple of hundred metres of the surface at both McGregor and Celtic Tiger is highly promising in terms of Resource expansion and the establishment of an economically viable mining strategy.

These shallower intercepts, alongside the successful extensions of the deeper Base of Reef mineralisation reported previously by ZMI, mean that the Phase 2 and 3 drilling programs are very likely to positively impact the current JORC Inferred Resource, which comprises 5.2 metres at 8.6% zinc and lead.

Encouragingly, shallow mineralisation also translates into low operating costs, and the fact that the deposits are adjacent to each other offers the potential to establish a larger scale plant which can accommodate high volumes of ore.

However, there is still much work to be done and investors should take all publicly available information into account and a cautious approach before making an investment decision.

What’s more, these recent exploration results also bring into play more than four kilometres of similar geology along the western margin of the Graben.

In the below images, you can see the geology plan of the Allenwood Graben, as well as a cross-section from Celtic Tiger to McGregor, including highlighted selected intercepts: 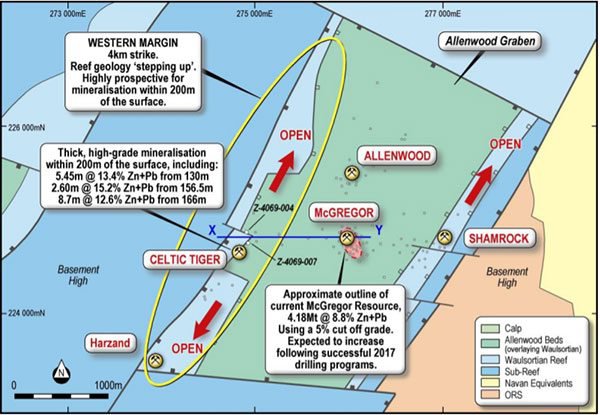 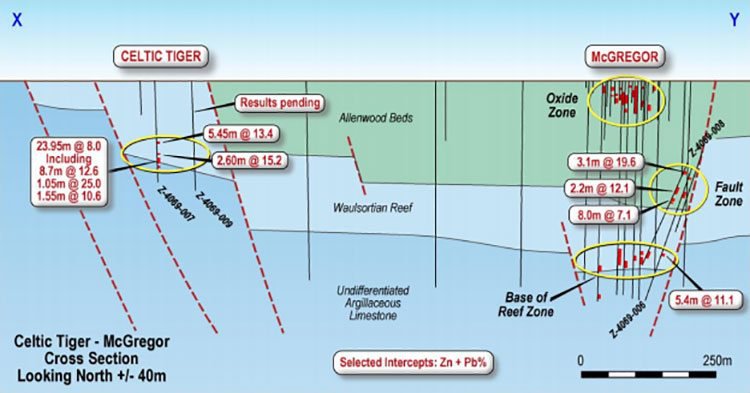 Subsequently, ZMI is now looking at a substantial exploration target at the more recently discovered Celtic Tiger, which will nicely complement its existing Inferred Mineral Resource at McGregor and Shamrock.

Here’s the plan of the McGregor prospect, showing the location of drill hole collars, projected hole traces and intercepts: 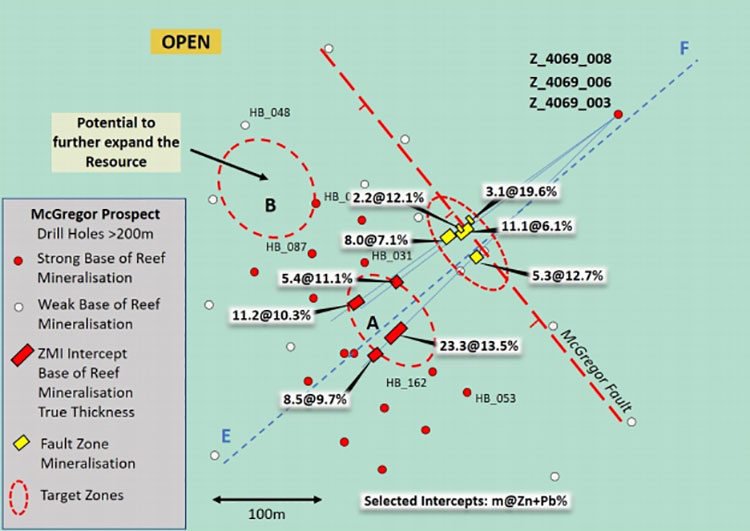 Especially significant are the shallower results that appear to be spatially related to the McGregor Fault, including 3.1 metres grading 19.6 per cent zinc and lead from 205 metres below surface.

Several other zones were intersected within 250 metres of surface in both drill holes. Three contiguous holes have now intersected this mineralisation, which, as indicated in the cross-section below, may correlate with high-grade mineralisation in historical hole HB162, some 100 metres to the south. 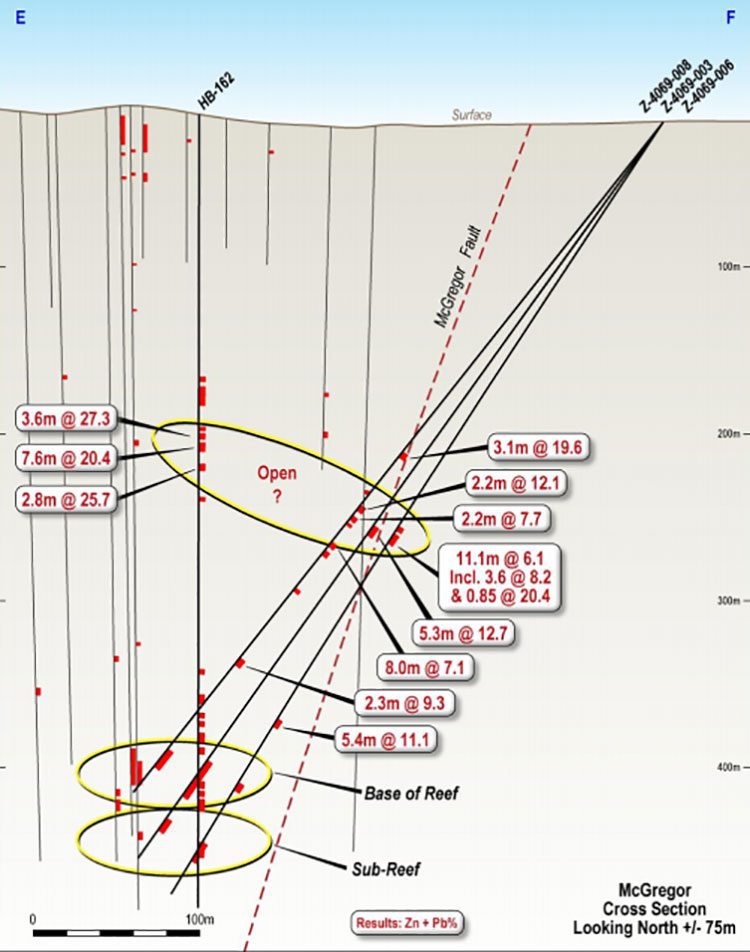 As you can see in the image above, 006 also intersected mineralisation comprising 5.36 metres grading 11.1 per cent zinc and lead from 366 metres towards the Base of Reef.

According to ZMI, the Base of Reef contact was faulted in this hole, and a portion of mineralisation is likely to have been displaced.

Further to that, drill hole Z_4069_007 at the Celtic Tiger prospect was drilled approximately 100 metres south of hole Z_4069_004 reported in July, which intersected several zones of mineralisation including 2.85 metres grading 20.9 per cent zinc and lead from 194 metres.

ZMI is looking to move fast as the year draws to an end, with a lot more up its corporate sleeve.

Yet, it remains a speculative stock and investors should seek professional financial advice if considering this stock for their portfolio.

Drilling will continue at Celtic Tiger, with a further two or three holes expected to be completed before Christmas.

ZMI is seeking out an updated Mineral Resource Estimate for the Kildare Project, plus a maiden exploration target for the Celtic Tiger prospect by the first quarter of 2018.

The company is also making plans for a Phase 4 drilling program at Kildare, which it aims to commence early next year, drawing on the significant recent breakthroughs achieved in terms of its understanding of the project’s geological potential.

If that’s not enough, as you may remember, in keeping with ZMI’s aggressive exploration and regional development strategy, the company has an option over the 650,000 tonnes per annum Galmoy zinc-lead processing plant, located some 70 kilometres from Kildare, and ZMI is continuing its due diligence to confirm the plant’s suitability. This will form a key infrastructure component for future development at Kildare.

Things are looking very busy for this ASX zinc explorer, and all of these activities have the potential to further drive share price momentum.

These are still early days for the $9.8 million-capped ZMI, but if it continues to put in the hard yards, it may not be long before it leaves its small-cap days far behind.

Will ZMI’s Resource Upgrade Give it an Early Mover Valuation Advantage?