Victory Mines (ASX:VIC) is looking to expedite its due diligence process for the proposed acquisition of four highly-prospective cobalt and scandium projects in New South Wales and Western Australia.

Next Small Cap readers who have followed VIC would know that the locality of these tenements is exceptionally promising.

VIC is looking to move swiftly on the NSW assets – Husky and Malamute – with plans already underway to send a geology team to commence a high-level exploration strategy. The team’s focus will be identifying cobalt and scandium mineralisation across the two tenements.

The proposed strategy, which is now being reviewed by the company’s board, contains six components:

If all goes according to plan, VIC will accelerate its exploration strategy as soon as possible .

The Malamute tenement is of particular interest, with past survey work indicating a substantial area of lateritic mineralisation that may equal or exceed the area of both AUZ and CLQ’s deposits. VIC will undertake additional desktop and field work to determine the full extent of prospective mineralisation at this location.

However, it should be noted that VIC is an early stage play and investors should seek professional financial advice if considering this stock for their portfolio.

There’ll be no momentum lost upon the completion of the NSW tenement review, with the geology team then turning its focus to the WA project areas which feature prospective nickel-copper mineralisation at Galah Well and Peperill Hill.

Historical descriptions of the sparsely drilled nickel-copper sulphide mineralisation and the geophysical aeromagnetic anomalies at Galah Well appear to be similar to the announced SGQ mineralisation, which returned average XRF readings of 5.5% nickel and 2.1% copper.

The above mineralisation has been attributed to a SANSOM EM anomaly which is open to the north and west, which may potentially trend into Galah Well’s project area.

With a current market cap of just $7.9 million, this emerging explorer is locked in and ready to go.

VIC to begin with NSW tenements

As mentioned in our previous article VIC Enters NSW Cobalt Hot Spot: Next Door to AUZ and CLQ which you can refer to for a more comprehensive read, the company has acquired four highly alluring project areas in NSW and WA from Cobalt Prospecting Ltd.

Here’s what Finfeed (a related entity of S3 Consortium Pty Ltd as defined in Section 9 of the Corporations Act 2001) had to say: 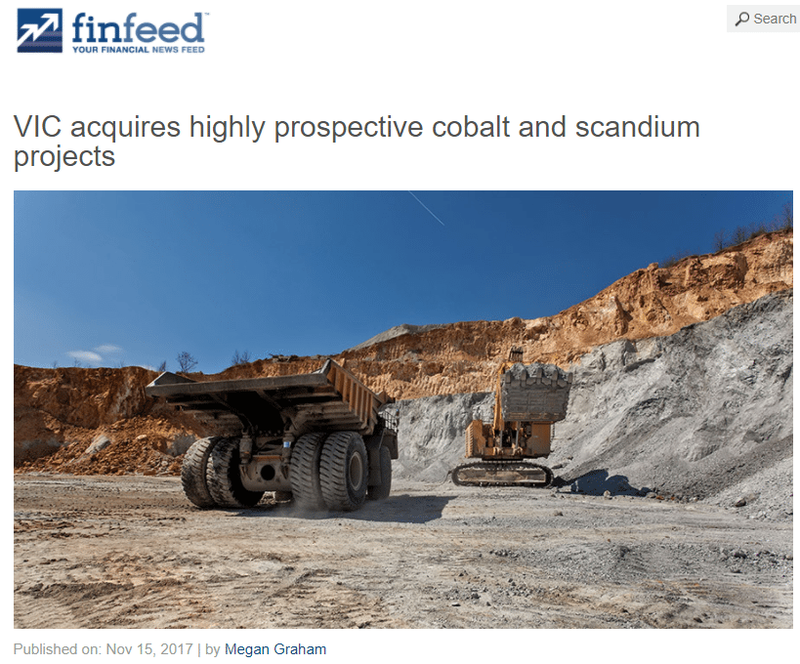 First up on VIC’s to do list is Husky and Malamute, which are located 150 kilometres west of Dubbo. The assets cover a total area of 224 hectares and are closely located to nearby peers AUZ and CLQ.

The region surrounding these tenements has become a prominent source of cobalt and now scandium, with both minerals being in strong demand from global markets.

VIC entered into a binding agreement to acquire 100 per cent of the issued capital of Cobalt Prospecting Pty Ltd (CPPL).

CPPL was established to secure mineral tenements in NSW and WA, primarily with the aim of developing assets that would produce cobalt (and secondly, scandium).

As you can see on the map below, the two NSW tenements, Malamute and Husky, are located approximately 150 kilometres west of Dubbo and cover a total area of 244 hectares. 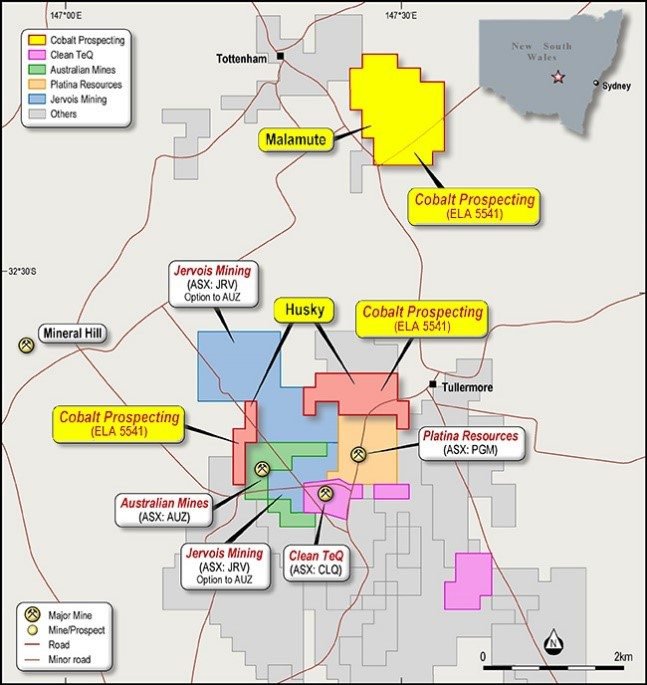 The project sites are near landholdings owned by Clean TeQ Holdings and Australian Mines Limited which are prospective for high-grade cobalt and scandium mineralisation.

It’s worth reminding you of the AUZ story here. Since we released the article: AUZ to Emerge as Major Developer of Key Battery Technology Metals , AUZ has been up over 930% on the back of its cobalt project in NSW since our coverage began – and $10M capped VIC has now sidled up right next door...

VIC would be looking for similar traction as it progresses its projects.

Vic also sits just 5 kilometres from Clean Teq. CLQ is capped at close to $1 billion and the following article offers an excellent analysis of why Clean Teq has been so successful. 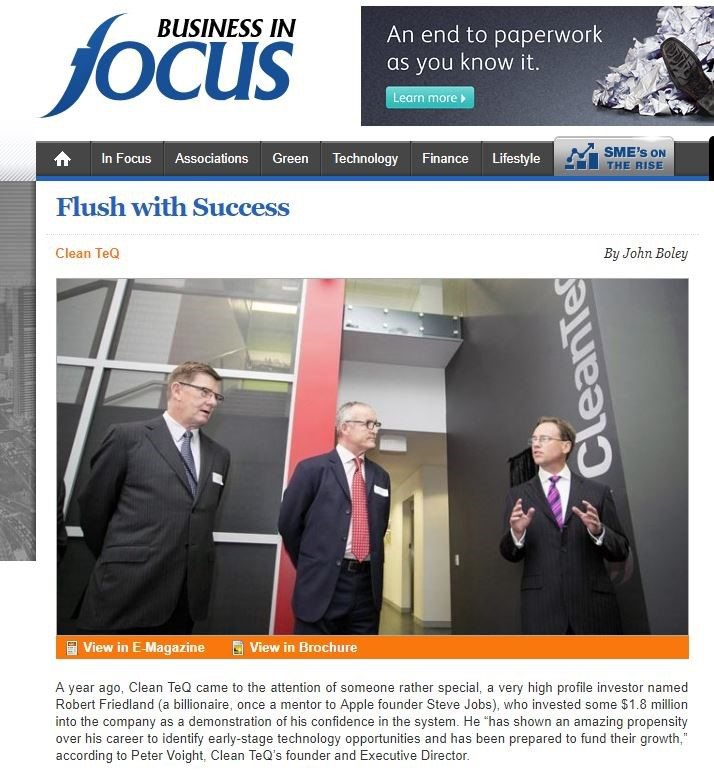 The aptly named Clean Teq is riding the new, clean energy wave on the back of its cobalt project.

Headlines like this have been pervasive (and persuasive) for some time now and the momentum continues to build.

So, you get a sense from this just how important VIC’s play is here, not only from a locational point of view, but also with regard to the space it has entered.

When you throw scandium into the mix, VIC could be in an even more commanding position if it can prove up these assets.

Why VIC stands out

In its latest announcement, VIC says it expediting due diligence for the proposed acquisition of the aforementioned highly prospective cobalt and scandium projects in NSW and WA.

Well, the intrusive body underlying the Malamute prospect is entirely within its project area. In comparison, CLQ and AUZ find themselves in the opposite position.

VIC could thus have an advantage in the long-term here, especially as this is a single prospect containing an area of lateritic mineralisation that may equal or exceed the area of both CLQ and AUZ’s deposits.

It is little wonder then, that VIC already has plans underway to send a geology team to Malamute and to Husky to commence a high-level exploration strategy which includes desktop review, mapping, rock-chip sampling and drilling.

The focus here will be on identifying cobalt and scandium across the tenements, given Husky is contiguous to AUZ and so close to CLQ.

Looking at VIC’s peer-group in the region, there is enormous upside.

VIC is still in the early stages compared with its peers, however if it can emulate the likes of AUZ, whose deposit is hosted in a magnetic anomaly with recent drilling results propelling the Project to doubling its cobalt, and tripling its scandium mineralisation footprints, then it could have a bright future ahead.

It should be noted however that this remains a speculative stock and investors should take a cautious approach to any investment decision made with regard to this stock.

In a nutshell, VIC has considerable exploration upside within its reach, for high-grade cobalt and scandium mineralisation across its newly-acquired assets.

The focus of this article is on the NSW project.

However, looking briefly at WA once the geology team is satisfied with its work at Husky, it will move to proceed to the WA project areas where the $56 million capped St George Mining (ASX: SGQ) has made an impressive, high-grade, nickel-copper sulphide discovery south of VIC’s Galah Well asset”.

Here’s a look at the proximity between the two companies. 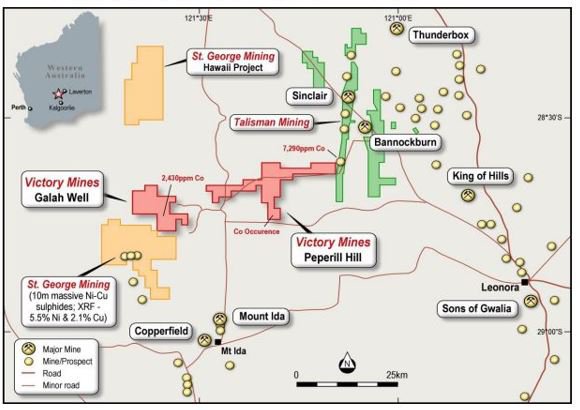 SGQ announced it had found outstanding nickel-copper sulphide mineralisation at its Mt Alexander project, which as you can see from the map above is directly south of VIC’s Galah Well project area.

Field results from the SGQ drilling program showed a >10m massive nickel-copper sulphide, with average XRF readings of 5.5% Nic and 2.1% Cu though laboratory certified assay results are required to confirm the veracity of the grades.

Of significant interest to VIC is this mineralisation is associated with a SANSOM EM anomaly which is open to the north and west. Potentially, it could trend into Galah Well’s project area, though significantly more analysis is required by the geology team to confirm the extent of nickel/copper sulphide mineralisation. It is noted an offset parallel east-west aeromagnetic anomaly structure that is characteristically similar to the SGQ identified mineralised structure.

As you can see, there is a great deal of upside here for VIC across both its NSW and WA projects.

With geologists now being galvanised into action and work programs soon to be determined, the recent acquisition could soon start to bear fruit.

There will be a great deal of news in the pipeline as work begins in earnest and VIC will be hoping that this news will be the catalyst for a significant re-rate of its $7.8 million market cap. 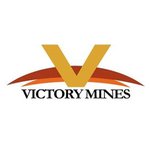 Is Victory Ahead for this ASX Listed Cobalt-Zinc Explorer?