It looks like diversified junior explorer MinRex Resources (ASX:MRR) got all it hoped for and more when it made the strategic decision to acquire three assets in NSW and WA that are prospective for cobalt, scandium, copper and nickel.

The three projects MRR is adding to its metals portfolio via the acquisition of Clean Power Resources are the Pacific Express Nickel-Cobalt-Scandium Project in north-eastern NSW, and the Knight and Dragon Nickel-Cobalt Projects in the Goldfields-Esperance region of WA.

The Pacific Express project in NSW has confirmed cobalt-scandium-nickel laterite mineralisation in legacy drill holes that were used to model and report a legacy JORC (1996) Indicated Resource of 4.6Mt at 0.09% cobalt, 40 g/t scandium and 0.61% nickel.

Initial due diligence results are now in for one of the three projects...and they are even better than could have been hoped for. In fact, the due diligence team has uncovered a prospective game-changer for the Pacific Express Project...

Legacy metallurgical test-work has verified the potential to develop a standalone scandium deposit.

The legacy testwork has been overwhelmingly clear in confirming that there is material exploration upside for Pacific Express, which has already highlighted a 159ppm scandium assay, at the Houston Mitchell Prospect within Pacific Express.

The legacy data is based on historic scandium leaching undertaken 20 years ago by Jervois Mining (ASX:JRV) on high-grade samples (60ppm scandium) which resulted in a 70% scandium recovery rate.

At the time JRV was in a in a collaborative joint-venture with the CSIRO to examine how scandium impacted aluminium alloys. Also noteworthy is a 2002 progress report on the JV which highlighted significant early interest by aviation giant, Boeing (NYSE:BA), in scandium alloys’ ability to mitigate against corrosion for a new aircraft design.

Sixteen years on, Boeing and Airbus potentially require up to 150tpa to make aluminium-scandium alloys to build up to 38,000 new aircraft over the next two decades, which we will look at in more detail shortly.

Of course MRR has a lot of work to do to come in Boeing’s calculations, so investors should seek professional financial advice if considering this stock for their portfolio.

It's also important to note that Pacific Express’ 0.61% nickel grade is potentially one of the highest in NSW, compared with other nickel-cobalt laterite deposits.

The quality of past results has convinced MRR’s Board to authorise the geology team to now use the legacy data to model a JORC (2012) compliant Resource.

These encouraging results come at an excellent time in regards to the commodity price cycle. Speciality and base metals are in an upcycle that is gaining momentum. The cobalt price, for one, has just hit a decade-high US$95,000/t on the London Metal Exchange.

There is a sharp increase in demand for specialty metals like cobalt and scandium, thanks to their use in lithium-ion batteries and the new technologies powered by these rechargeable batteries. Certainly if Boeing has a vested interest, scandium and thus MRR could take flight sooner rather than later.

We last updated you on MinRex Resources (ASX:MRR) and its growing metals portfolio on March 26 with the article, MinRex Boosts Metals Portfolio with Cobalt Acquisitions. This was the same day MRR announced the acquisition of 100% of the issued capital of Clean Power Resources Pty Ltd (CPR).

With that acquisition, MRR added three of CPR’s high-quality project areas to its metals portfolio — the Pacific Express Nickel-Cobalt-Scandium Project in north-eastern NSW and the Knight and Dragon Nickel-Cobalt Projects which lie about 50 kilometres west of Leonora in WA, as seen on the map below. 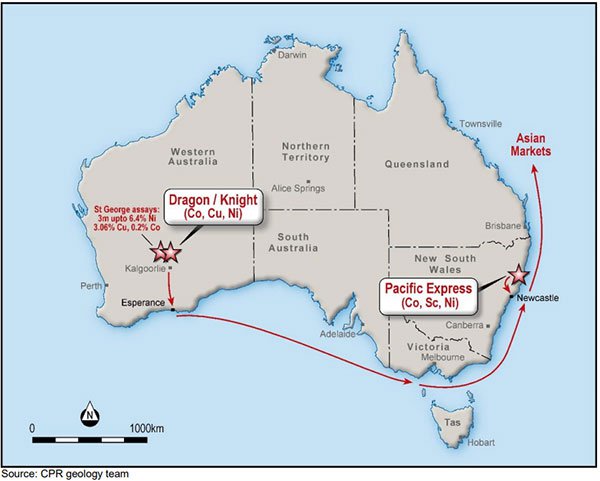 Each of these projects come with promising drill results and are located close to supporting infrastructure and key ports — Newcastle in NSW and Esperance in WA.

MRR’s acquisition of these highly prospective assets delivers exposure to in-demand specialty metals cobalt and scandium in the first instance, as well as nickel and copper.

Analysis of the legacy metallurgical evidence is overwhelmingly clear in confirming that there is material exploration upside for the Pacific Express project.

The Pacific Express Project in NSW was the first of the three Clean Power Resources’ projects to undergo pre-acquisition due diligence.

The project hosts cobalt-nickel-scandium laterite mineralisation with a legacy JORC (1996) Indicated Resource of 4.6Mt at 0.09% cobalt, 40 g/t scandium and 0.61% nickel.

Because historic reporting from the area focused on nickel, the cobalt and scandium-rich horizons of the project were largely overlooked. This provides an obvious opportunity for MRR in its exploration efforts at the site, especially now that cobalt and scandium prices are on rise.

MRR released an update today on its pre-acquisition due diligence on the Pacific Express Project. The update took a closer look at the scandium mineralisation, particularly at the prospect of developing a standalone deposit at the Houston Mitchell prospect, which is located within the tenure. This follows the discovery of legacy metallurgical reports from circa 20 years ago at Houston Mitchell.

The due diligence, which has already highlighted a 159ppm scandium assay, uncovered legacy metallurgical results suggesting the Houston Mitchell prospect could be developed into a standalone scandium deposit.

That determination was based on historic scandium leaching undertaken two decades ago by Jervois Mining (ASX:JRV) on high-grade samples (60ppm scandium) from the Houston Mitchell prospect which resulted in a 70% scandium recovery rate.

This was on the back of a collaborative joint-venture research and development initiative with the CSIRO which examined how scandium impacted aluminium alloys. Notably, a 2002 progress report on the JV highlighted significant early interest by Boeing (NYSE:BA), in scandium alloys ability to mitigate against corrosion for a new aircraft design — Boeing’s proposed sonic cruiser.

Today, Boeing and Airbus potentially require up to 150tpa to make aluminium-scandium alloys to build up to 38,000 new aircraft over the next two decades, which are lighter than current alloys and will facilitate moderating fuel usage.

MRR also did test-work on bulk samples from Hurll’s Hill, which is just outside the tenure boundary and is interpreted to contain similar geology sequences. It returned recovery rates up to 96% cobalt and 94% nickel, clearly highlighting the exploration upside.

The Hurll’s Hill bulk samples also demonstrated the cobalt head-grade could be increased up to 4,500ppm cobalt by screening or sizing to separate the upper limonitic zone and rejecting the marginal ore to waste.

Here is the Pacific Express Project mapped out, including the Houston Mitchell and Hurll’s Hill prospects: 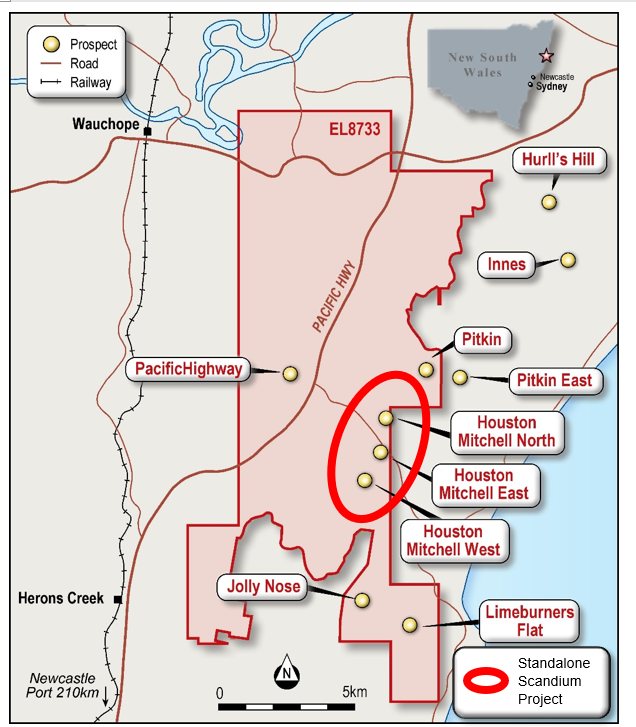 Overall, MRR conducted four rounds of metallurgical tests at Houston Mitchell and Hurll’s Hill. The findings are summarised below.

MRR is still an early stage play in comparison, so investors are advised to take a cautious approach to any investment decision made with regard to MRR.

Here is a peer comparison with other NSW nickel/cobalt grades: 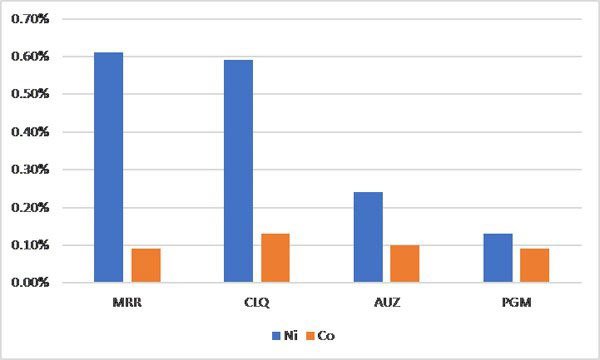 This is was discussed in the following article from finfeed.com (a related entity of S3 Consortium): 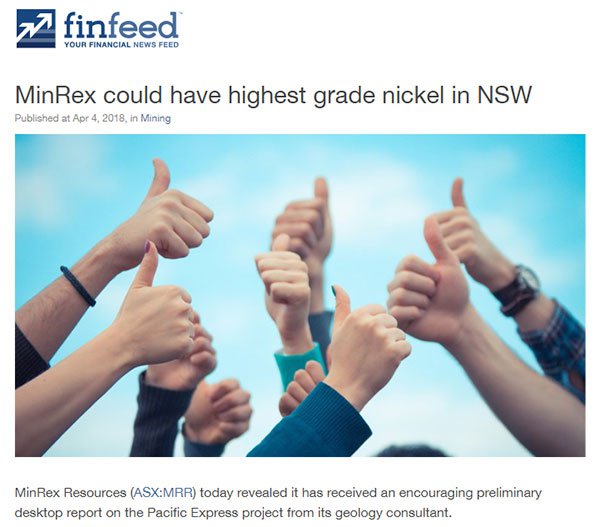 Back in 2002, Jervois Mining, in a collaborative joint-venture research and development initiative with the CSIRO’s Manufacturing Science and Technology division in Adelaide, examined how scandium impacted aluminium alloys.

Sixteen years on, demand for scandium is set to grow significantly moving forward, with Boeing and Airbus potentially requiring up to 150tpa to make aluminium-scandium alloys to build up to 38,000 new aircraft over the next two decades

Moving forward, the dynamic has changed materially, with demand for scandium set to grow strongly over the next two decades. Potentially, if Boeing/Airbus predictions to build up to 38,000 new aircraft by 2040 are realised, the aviation industry alone may require 150tpa of scandium to make aluminium alloys.

Boeing’s early interest in scandium alloys could very well be just the start for the aviation industry, with future take-up rates set for significant growth over the next two decades.

The scandium-contained aluminium alloys can deliver some US$9 million in value savings to airline operators over the life of every mid-body. This is due to metal’s allowing for the manufacture of lightweight jets, reducing or eliminating the use of rivets, and reducing fuel consumption.

The following article provides an overview of the expected uptick in demand for scandium from the airline industry.

The other projects that MRR is acquiring as part of its acquisition of Clean Power Resources, the Knight and Dragon Projects, are located in the Goldfields-Esperance region of WA — about 50 kilometres west of Leonora.

The Knight Project and the Dragon Project are not far from the $37 million capped St George Mining’s (ASX:SGQ) Mt Alexander prospect. High-grade mineralisation has been confirmed at Mt Alexander, including three metres at 6.4% nickel, 3.6% copper and 0.2% cobalt. This certainly gives the region’s reputation a boost as a highly prospective mining destination.

Meanwhile, the $38 million capped Talisman Mining (ASX:TLM) hold land that’s contiguous to the Knight and Dragon projects, and those top-shelf tenements produced 38,500 tons of nickel between 2008-2013 at an average grade of 2.44%.

That being the case, MRR’s geology team is feeling confident and plans to fast-track a desktop review and assessment of legacy data compliant with the 2012 JORC code as soon as all acquisition due diligence has been executed.

Although confidence may not translate to long-term success here so investors should seek professional financial advice before making an investment decision.

Given the data is it working with, could we see an upcoming Resource upgrade for MRR?

Any future metallurgical testing will use modern testing techniques that will ensure maximum metal recovery from the lateritic ore. This should boost confidence that a viable scandium deposit can be developed. Notably, peers such as Clean Teq (ASX:CLQ) and Platina Resources (ASX:PGM) have developed scandium extraction techniques which have achieved recovery rates of 98% and 90% respectively.

MRR will summarise and properly catalogue all the legacy metallurgical studies of Pacific Express to help fast track the pre-feasibility study once exploration and reserve definition is complete.

It also plans to commence work on modelling legacy data to ascertain if an inferred Resource that complies with the JORC 2012 code can be generated.

From there, if all goes to plan, MRR will design and formulate preliminary drilling campaigns for the most prospective target areas within the Pacific Express tenure.