So when a monster, European car making conglomerate like Volkswagen starts announcing big moves into the electric vehicle battery space - it pays for investors like us to listen...

Here is a link to the two hour live stream recording - we have pulled out the key statements that are relevant to our investments in EMN and VUL:

VW will be standardising on one battery cell type - using lithium and high manganese content.

Six new factories on the European continent - first in Germany and fourth one possibly in the Czech Republic - using 200,000 tonnes lithium per year.

Commitment to sustainable and local supply

We love that Volkswagen is moving into the sexy world of electric vehicles in a huge way and appreciate how hard it probably was for these fellas to lose the ties.

BUT - while Tesla may be more cool, Volkswagen makes WAY more cars ... and makes them in Europe too, which is very important for our investments in VUL and EMN.

EMN should be absolutely chuffed with last night’s announcements that Volkswagen wants to standardise on one type of battery cell, and that this “volume cell” will contain “high manganese content”.

Volkswagen says that this “volume cell” is going to make up the majority of its production.

EMN obviously scores big on Volkswagen’s required sustainability and local supply needs given its project is recycling old mine site tailings AND is located in Eastern Europe in the Czech Republic.

Vulcan Energy Resources (ASX:VUL) has developed the world’s first and only Zero Carbon lithium process and plans to produce battery-grade lithium hydroxide from geothermal brines pumped from wells with a renewable geothermal energy by-product in Germany.

I almost spat out my chamomile tea last night when Volkswagen said they plan to build SIX Electric vehicle factories on the European content by 2030... which will eventually chew up 200,000 tonnes per year of lithium. 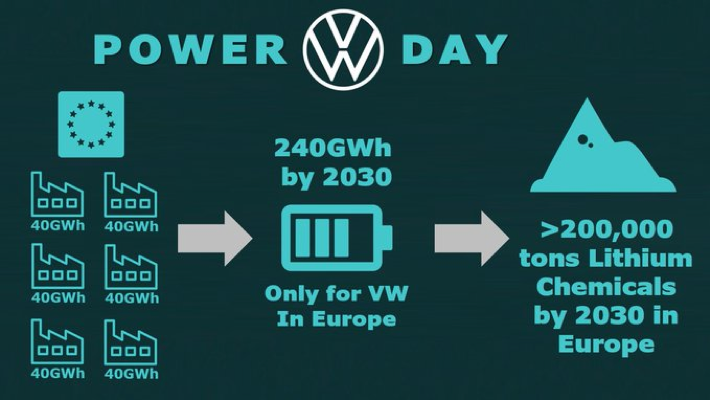 This was a huge bit of news for VUL, especially that it will be one of the few producers that can meet Volkswagen's commitment to sustainable development.

As if this news from overnight wasn’t enough VUL just couldn’t help itself and this morning announced a rock star board advisor appointment - Julia Poliscanova who has been instrumental in shaping policies around EU vehicle CO2 standards & sustainable batteries, heading T&E’s vehicles programme since 2019.

Her other credentials include an MSc in Energy, is an expert in EU energy policy and has been at the forefront of climate related policy issues addressing air quality, renewable energy, energy efficiency, batteries and vehicle CO2 legislation for the past 10 years in the EU at T&E and as senior EU policy officer for the Mayor of London, and before that as an advisor in the European Parliament.

Regular readers will know we have been investing in the sustainable, local European battery metals thematic for a long time, and the Volkswagen Power Day news has been a great validation of the long term potential this investment thematic has.

We hold long term positions in booth VUL and EMN - for a summary check out the original eBook we launched for Tesla’s battery day last year.