The announcement of Joe Biden as President elect, will usher in a new policy direction for the US government.

These policies will shape global markets for the next four years and potentially beyond and include:

From these policies, there will be industries that thrive, while others will have to find new ways to conduct business.

In the following article we list 4 ASX winners under a Biden presidency.

A Biden government will act quickly on climate change.

One of Biden’s policies is a $2 trillion plan to combat climate change which, according to the Washington Post, includes the elimination of carbon pollution from the electric sector by 2035. 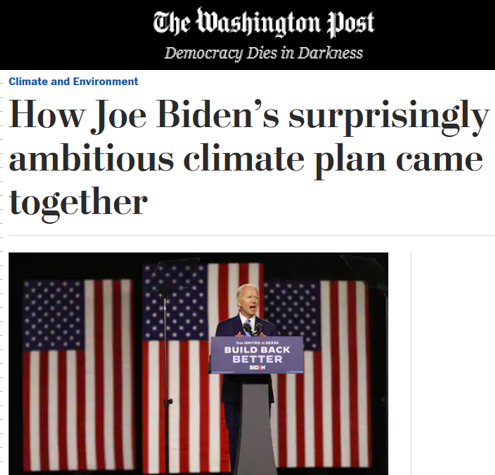 EV manufacturers are already taking action as Biden is expected to reinstate the legal basis for California’s zero-emission vehicle rules.

The world’s largest car company Volkswagen Group, is shifting its strategy to produce more EVs, saying a Biden win is more aligned with its roll-out strategy, particularly in the US.

Barring any legal obstacle, Biden will be inaugurated in January. He is already acting on his climate change policies, putting together a think tank that should be in place as early as this week. 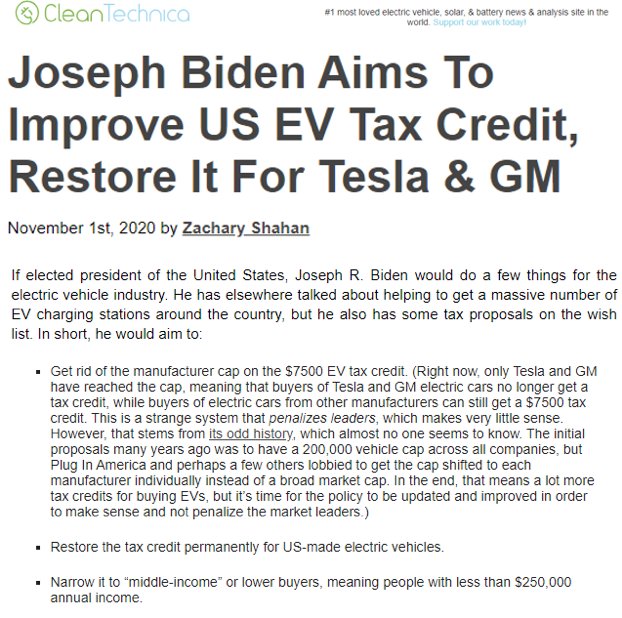 These policies should have global impact and influence global stock markets and the companies that trade on them.

Including in Australia on the ASX.

Our first two companies that will benefit are Euro Manganese (ASX:EMN) and Vulcan Energy (ASX:VUL):

Euro Manganese Inc. (ASX | TSX-V: EMN) is focused on the development of a new high purity manganese production facility, based on the recycling of a tailings deposit located in the Czech Republic.

The battery metals developer is capitalising on the once in a generation shift to electric vehicles and is right on the doorsteps of multiple battery makers’ European factories in the world’s fastest growing battery and EV market.

The Biden policy change toward favouring green energy metals such as high purity manganese and lithium will help to increase demand for metals in this supply chain, that could in turn lead to a surge in EV production. This could have positive ramifications, particularly for potential suppliers such as EMN which is set to supply manufacturers in this area.

We first invested in EMN in September this year at 6.5c and then again at 20c. A major reason for our investment was Europe’s drive to carbon neutrality, which will only be accelerated by US demand.

Here is a look at some other reasons we made an investment: 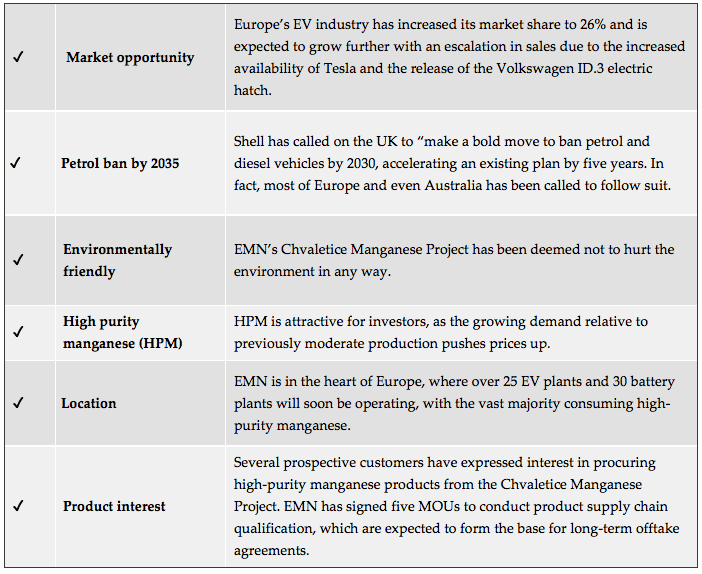 In the following interview, EMN CEO Marco Romero spoke to Next Investors about what a Biden Presidency could mean for the industry and for EMN.

“President Trump and his administration were climate change sceptics at best and did very little to encourage electric vehicle sales,” Romero told Next Investors.

“Joe Biden and a new Democratic administration can be safely expected to renew combat against climate change and to refocus the US Government on the decarbonisation of the American economy. This will no-doubt accelerate investment in renewable energy, electric vehicles and lithium-ion battery production. Given the scale of the US economy, the effects of this policy change on the lithium-ion battery supply chain will be global in scope.

“The incoming Biden administration is expected to invest in the deployment of a vast national network of EV fast-charging stations, to restore full EV purchase tax credits and to tighten fuel consumption standards. This should result in a strong increase in US EV sales in coming years, fuelling further demand growth for battery raw materials like nickel, lithium, graphite and high-purity manganese.”

Vulcan has developed the world’s first and only zero-carbon lithium process and plans to produce battery-grade lithium hydroxide from geothermal brines pumped from wells with a renewable geothermal energy by-product.

The US is an important market for European Cars and European auto manufacturers will now need to increase their supply of EV’s for the US market.

Vulcan will benefit from both the wider development of the lithium brine industry as major oil and gas companies look to become involved as well as the price drivers in additional lithium demand.

We first took position in Vulcan at $0.18, and again at $0.85. Here’s why we entered the stock and continue to maintain a large position. 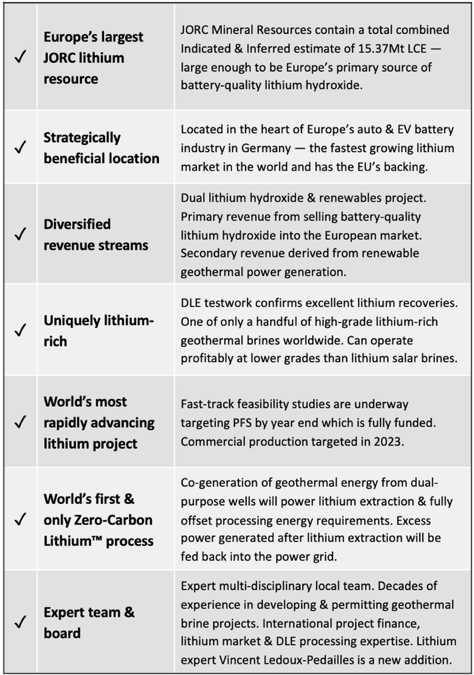 Cybersecurity will get stronger

As with any Administration, US security is of paramount importance.

Plans are already underway to bolster US defenses against hackers from Russia, China and other adversaries.

Stakeholders are confident a Biden administration can bring a better organized, more sustained focus on threats like election interference and cybercrime. 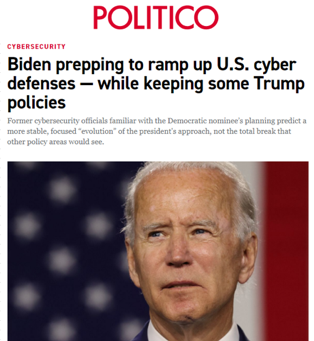 “Unlike Donald Trump, Joe Biden recognises that cybersecurity is one of the preeminent challenges of our time,” Jamal Brown, the Biden campaign’s national press secretary, said in a statement to POLITICO.

While cybersecurity was not a big focus of Biden’s campaign, it will be a major focus of a Biden government.

As discussed, Joe Biden has promised to push Cybersecurity as a priority.

Some of Trump’s policies will remain. However, there is likely to be a change in focus and energy.

Joe Urchill journalist with SC Magazine writes “Leadership changes have a more profound effect on how information gets to the president and how the president weighs the different priorities of different agencies and of industry partners. A Biden pivot back towards a more traditional, full collection of White House advisers, including restoring dedicated cybersecurity staff, could ensure that the issue doesn’t get lost during a presidential term dominated by recovery from a COVID-19 shattered economy and several national disasters.

He also writes, Former DoJ employees note that many of the prosecutions of Chinese hackers for economic espionage that we see today, for example, are the result of strategies and investigations put in place in prior administrations, sharpened by Chinese actions and new lessons learned. 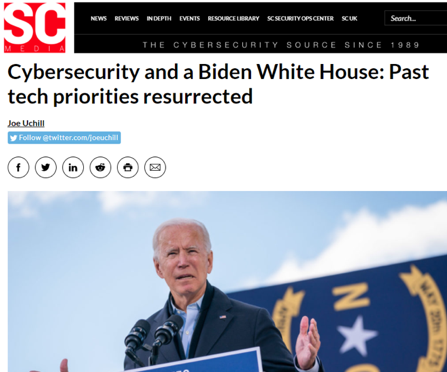 WHK is one company that knows all about cybersecurity requirements for government departments, having worked with the DoJ.

CEO, Founder and Chair, Terry Roberts is a 35-year veteran of the US national security and cyber intelligence community and is a former Deputy Director of US Naval Intelligence, a Department of Defence Senior Executive, the Vice President for Cyber Engineering and Analytics at TASC, and an Executive Director of the Carnegie Mellon Software Engineering Institute.

She is one of the reasons we took a position in this company in May 2019 – the longest held company of any in our portfolio.

In the recording below, Terry speaks to Next Investors about what a change of administration means for cybersecurity initiatives in the US.

We added WHK to our portfolio in May 2019. We invested at 6.4 cents and increased our position at 11.3 cents and then again at 13.3 cents. We are high conviction, long-term holders of WHK, and are looking for continued, sustained growth in company value over the coming months.

Here’s why we bought in: 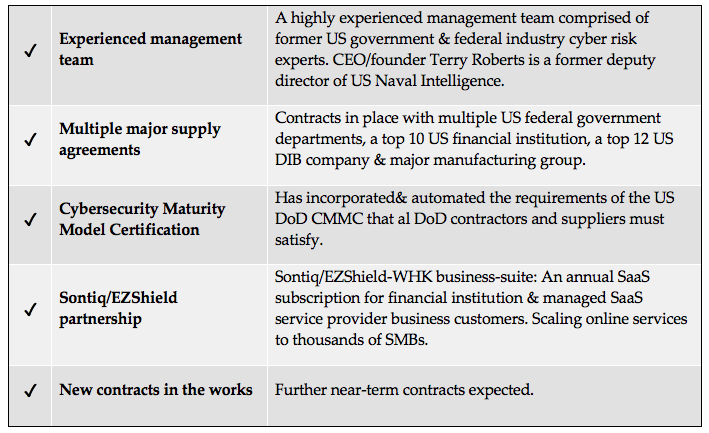 With a refocus on secure government, WHK is well positioned to benefit in future, particular with the government contracts it has already in place.

The Democrats will push for greater cyber protection from foreign government interference across all areas of government and in industry.

This will drive business to WHK.

Climate change will be just one facet of Biden government policy change.

“There is enormous impetus from Europe for a broad range of changes on ESG commitments, from protection of endangered species to protecting human rights to promoting supply chain sustainability. To the extent that companies have dealings with Europe, they are pursuing projects and policies that take ESG concerns into account,” said Ken Rivlin, partner and global head of environmental law and global head of international trade and regulatory law at Washington based law firm Allen & Overy.

According to Martin Jarzebowski, director of responsible investing at Federated Hermes, “ESG will continue to grow on its own regardless of the political environment.”

The US election highlighted the importance of ESG (environmental, social and governance) issues.

Those who adopt ESG investing as a key criterion are interested in the impact of their investments on issues beyond clinical financial outcomes. 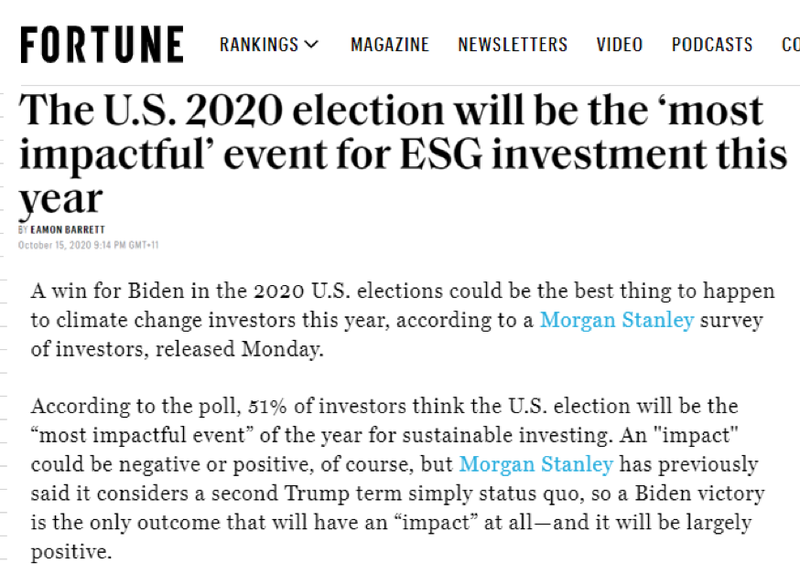 It took a while for investors to warm to this form of investing because there was an initial school of thought that enterprises embracing these issues would do so at the expense of profitability.

However, this has changed as investors have seen examples of an alignment between the quantum of stakeholder returns and commitments to ESG.

Alexium specialises in the manufacturer of flame-retardant chemical compounds for application onto synthetic materials.

It develops environmentally-friendly flame retardant chemistries for many fabrics, including synthetic-rich fabrics, in the textile industry. It also creates custom solutions that yield “exceptional FR (flame retardant) performance and provide any other fabric characteristics that are required for end-use application

There is new environmental legislation planned and the chemical industry is a target especially post revelations regarding DuPont’s Teflon.

This will include toxic chemicals used in Fire Retardants such as Bromine.

Alexium’s portfolio of environmentally friendly specialty chemicals will be in greater demand.

Alexium CEO Dr Bob Brookins put AJX’s position into perspective when he spoke with Next Investors.

Bromine was about to be banned in 2015 under a Chemical Toxins bill covering a number of chemicals that was being pushed by Democrat Senator Charles Schumer ( now Leader of the Democrats in the Senate). That bill was shelved but with the Democrats back in charge and the environment at the top of the agenda, we should see this bill revived.

This bodes well for companies such as AJX.

We invested in AJX in March at 6.5c and continue to maintain a large holding. We see major upside for the company especially as with its ESG focus.

Here’s why we invested: 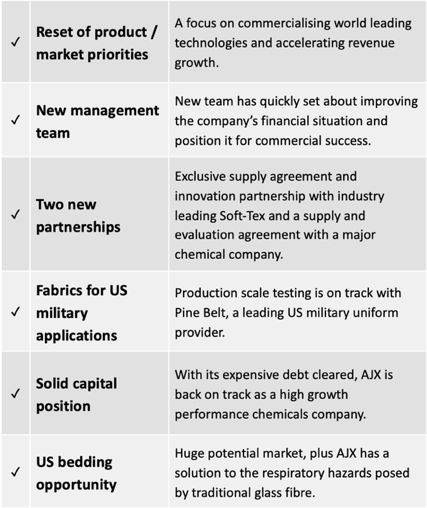 Joe Biden is expected to take office in January. However, he is already hard at work trying to reunite America, whilst moving the country forward in terms of policy.

Many of his policies are favourable to the movements we have seen outside of the USA that are leading the world in better governance and environmental management.

This means, there will be markets that benefit and investors who will be rewarded.

Companies such as EMN, WHK, AJX and VUL, should all be the beneficiaries of Biden’s policies.