We’re avoiding all the ‘girl’s-best-friend’ stereotypes, and staying firmly on the trail of a diamond in the rough in this edition of The Next Small Cap .

Merlin Diamonds (ASX:MED) is an ASX-listed sparkler still in its infancy on its way to becoming a dominant diamond producer. However MED can already be credited with Australia’s largest diamond find.

MED, which has assets in the Northern Territory and Western Australia, also wields Australia’s 5 th largest diamond discovery of 35.26cts, extracted in January 2017. Click on the video below , to see MED’s assortment of diamonds extracted: 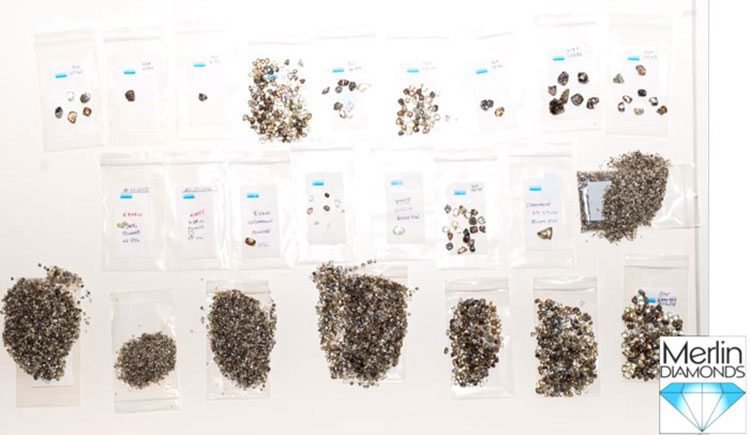 It should be noted here that MED is an early stage play and investors should seek professional financial advice if considering this stock for their portfolio.

Whilst the company has been not in production lately, it is now ready to start production using a Tomra XRT sorter. This means MED could once again manifest high-carat rough diamonds at a consistent rate, outscoring much larger mining operations around the globe.

The Tomra XRT is important as it enables MED to recover large diamonds up to 40mm in size, which wasn’t previously possible for MED given its plant limitations.

Furthermore, a new processing plant will be able to process ore up to 40mm in size compared to the previously used 20mm. It is expected that the new processing technology will also improve diamond recovery efficiencies and costs.

With all that in mind, MED could represent a value-based investment opportunity.

Merlin Diamonds (ASX:MED) is a diamond explorer working at the sharp end of diamond commercialisation, and its operations are gathering pace.

MED’s first batch of kimberlite ore is ready for processing, which effectively means the company has 150,000 tons of material it can potentially harness and generate revenue from.

Having commissioned a specialised Tomra X-Ray Transmission (XRT) sorter, MED is now ready to resume production and quickly pick out its next set of rough diamonds (only with a much higher carat-size). 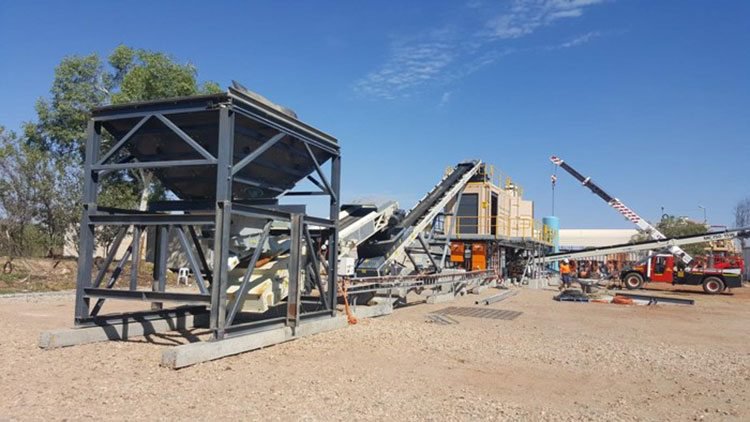 The important carrot for MED is that it will generate cashflow in coming months as it initiates its longstanding aim of becoming a large-scale diamond miner. MED is effectively using ‘pay-as-you-go’ exploration whereby the proceeds from its current small-scale operation will be reinvested into mining for higher carat stones and higher-grade kimberlite.

In order to stand a chance of reeling in the largest diamonds, MED is turning to Tech

One of Africa’s largest mines (Karowe) demonstrated how effective Tomra XRT-enabled sorting can be, after it installed multiple XRT sorters to recover larger stones. In 2015, aided by Tomra XRT, Karowe’s operator (Lucara) recovered a 1,111 carat stone, the second biggest in history.

The Tomra XRT sorting process uses the detection of the carbon atomic density of diamond (similar to airport x-ray security systems) to separate diamonds from surrounding waste. This is in contrast to previous traditional x-ray luminescence sorting machines that rely on diamonds to luminescence when exposed to x-rays. However, a proportion of diamonds display low luminescence and may not have been recovered. It is expected that the new processing technology will also improve diamond recovery efficiencies at lower luminescence, compared to past practices that may have not recovered some diamonds with low luminescence.

As a benchmark comparison, Lucara recently sold a 341.9-carat diamond of roughly the same quality for $20.6 million — which equates to around $60,251 per carat.

MED is becoming a bit of a big-ticket item hauler, with its own plump diamond discoveries. The reason why MED now has its hat in the proverbial ring, because the company is now using the same high-calibre equipment as Lucara, otherwise known as the Tomra XRT, and it has a history of big diamonds.

Let’s review MED’s chances to see if this gem-extractor can extract some benchmark premiums for investors.

MED digs up diamond-bearing ore, processes it in a simple low-energy method, and then sell the rough diamond content in Antwerp, Belgium.

The simplified route to market, combined with MED’s low cost-base, gives us confidence that MED will be able to sustain its production rate for many years, and that’s assuming no additional exploration or additions to its existing JORC Resource of 19Mt at 24cpht for 4.31Mcts .

The Merlin Diamond Project comprises exploration tenements in the Northern Territory which effectively encompasses the known extent of the Merlin kimberlite field. 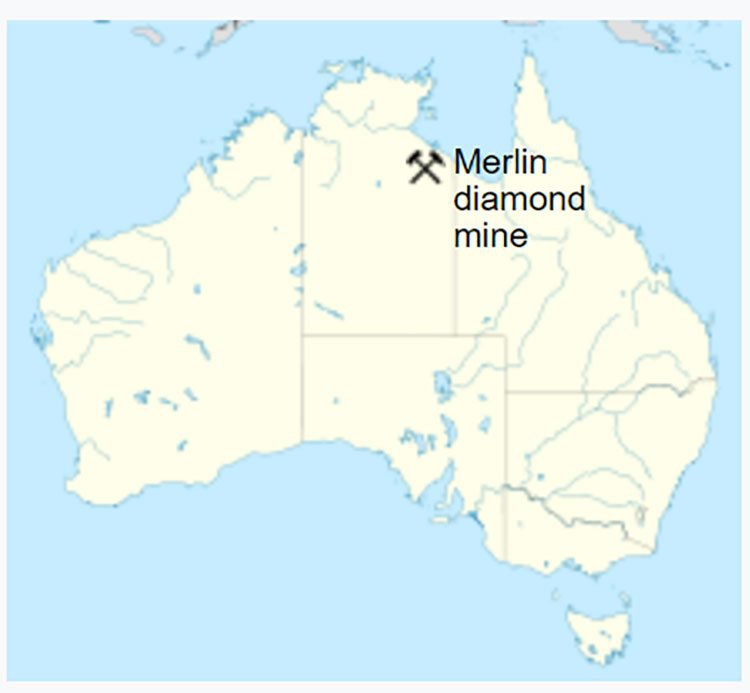 The Merlin Diamond Project is located some 100 kilometres south of the settlement of Borroloola and comprises 14 kimberlite pipes, grouped into four clusters. Nine of these pipes were subject to open-pit mining over a five year period commencing in 1998. The operations ceased in 2003 having produced 507,000 carats of diamonds. However, this is where MED has all of Rio Tinto’s oversize material.

The big attraction of MED’s Merlin mine is the fact that it holds the record for the largest diamond ever found in Australia along with a large population of sizable diamonds. 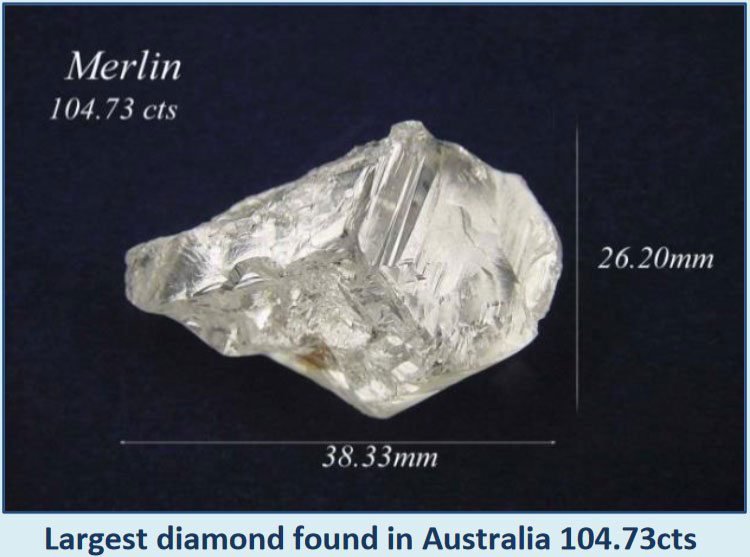 Here is MED in action: 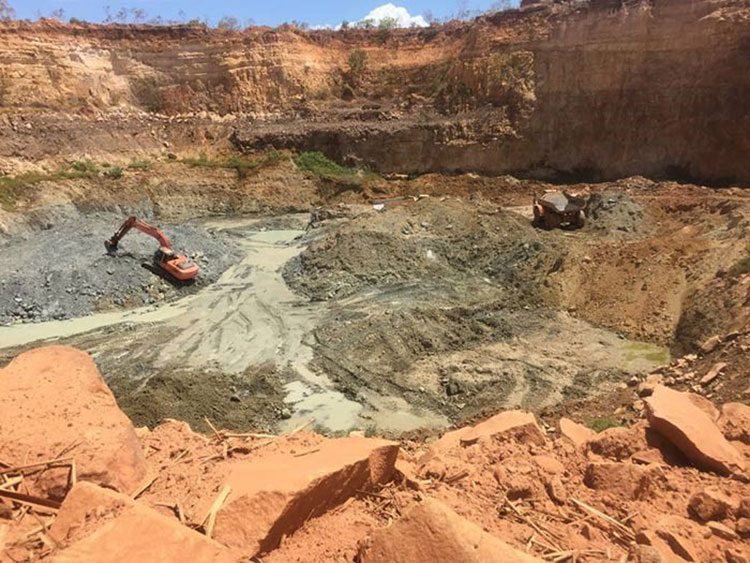 All the kimberlite rock that MED extracts is processed and sorted for rough diamond nuggets that can then be further refined into high-value gems.

All the excess ore that cannot be processed immediately, is then stockpiled for processing to be carried out at the next available opportunity. Given the fact that MED’s facility is able to run around the clock, even at night-time, reflects the additional processing capacity MED has access to, as well as the simplicity of diamond mining in general.

The bottom line is that processing kimberlite is not energy or chemical intensive. This means far lower safety or environmental risks and is very conducive for strong project viability.

The Merlin kimberlite field was discovered by Ashton Mining Ltd after systematic exploration between 1991 and 1994. After periods of trial mining and feasibility studies Ashton Mining Ltd was taken over by Rio Tinto Pty Ltd.

Merlin did not fit into the asset portfolio of Rio Tinto as it was too small and subsequently the Merlin mine was acquired by North Australian Diamonds Ltd in 2004. Since that time resource definition drilling and trial production increased the known JORC-compliant Resource of diamonds to be the second largest in Australia, surpassed only by the Argyle diamond mine.

Under the leadership of Joseph Gutnick ( who recently boosted his stock holding in MED ), feasibility studies examining options to enable near term production at Merlin were commissioned. As a result of these studies, the company applied for and was granted a MMP (mining management plan) which enabled it to recommence diamond production in 2013.

During its short operational life, the Merlin Diamond Project was renowned for the production of top quality white diamond and large specials. In 2012, a parcel sourced from Merlin was sold on international markets generating proceeds of US$1.865 million.

As we’ve said already, MED is placed in amidst some of best kimberlite deposits in the world.

In addition to the most highly-prized crystal-clear diamonds, shown below... 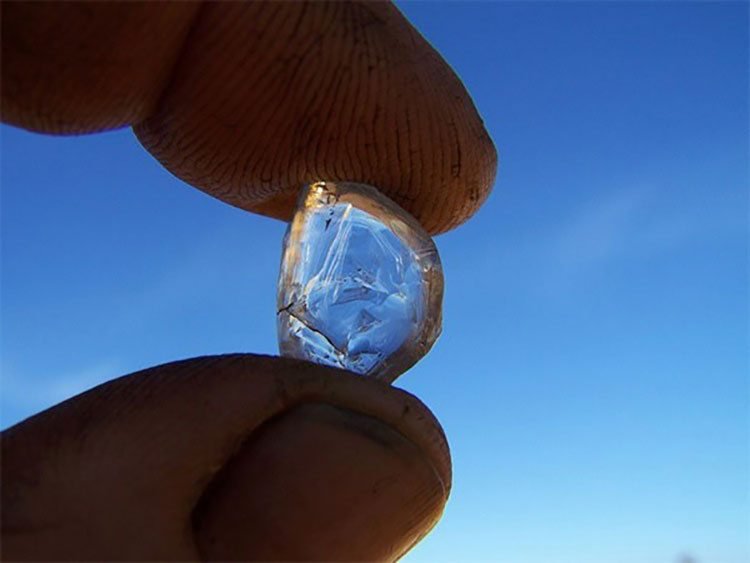 ...MED is also proving up coloured diamond derivatives which indicate a high-value project with plenty of diversity in the type of colouration.

As you can see, MED is birthing surprisingly large diamonds in the rough, on a regular basis, and it’s all down to the geology and equipment.

In the most recent sale, MED achieved a price of US$11,897 per carat for a total revenue of US$157,880 which bodes well for future production.

Let’s see what kind of officially-recognised assets MED has so far...

First of all, here is MED’s all-encompassing ‘ore reserve’ which boasts 11.1Mt at 26cpht and 2.89Mcts (million carats).

From that, MED’s JORC Resource can then be whittled down to a more accurate, commercialisation-friendly number.

From the various Kimberlitic volcanic pipes in MED’s possession, MED is estimated to have an Inferred Mineral Resource of 15.93Mt and an Indicated Resource of 3.1Mt. In total, MED’s diamond project in the Northern Territory is estimated to contain 19.02Mt at 24cpht for 4.31Mcts. 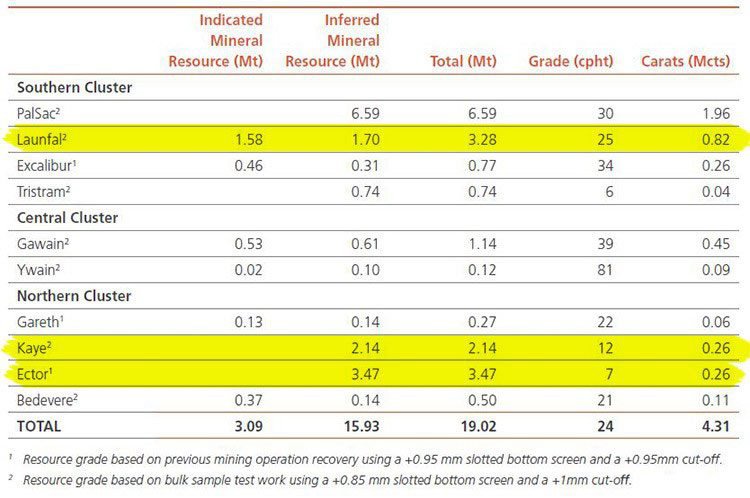 For a company worth A$13 million and priced at 0.6 cents per share, a JORC Resource stretching into the millions of tonnes suggests there is revaluation ahead.

The future performance of this product should not be assumed based upon current or past performance alone. Caution should be exercised in assessing future claims of performance, as these are based on assumptions and structured guesses. This product, like all other financial products, is subject to market forces and unpredictable events that may adversely affect future performance.

Also ahead, is the prospect of MED conducting further exploration and adding to its Indicated Resource next year.

The world diamond market is represented by diamond mining and trade in rough diamonds. The bulk of the world diamond mining is concentrated in nine countries, with their share in the global production in physical terms as high as 99%. The world’s largest producers of natural diamonds are Russia, Botswana and the Democratic Republic of Congo (DRC), all together accounting for 59% of the global diamond production.

However, Australia is gradually crawling up the list of global diamond producers. The name of the game in diamonds, is pretty much the same as in all other resources exploration projects: cost. 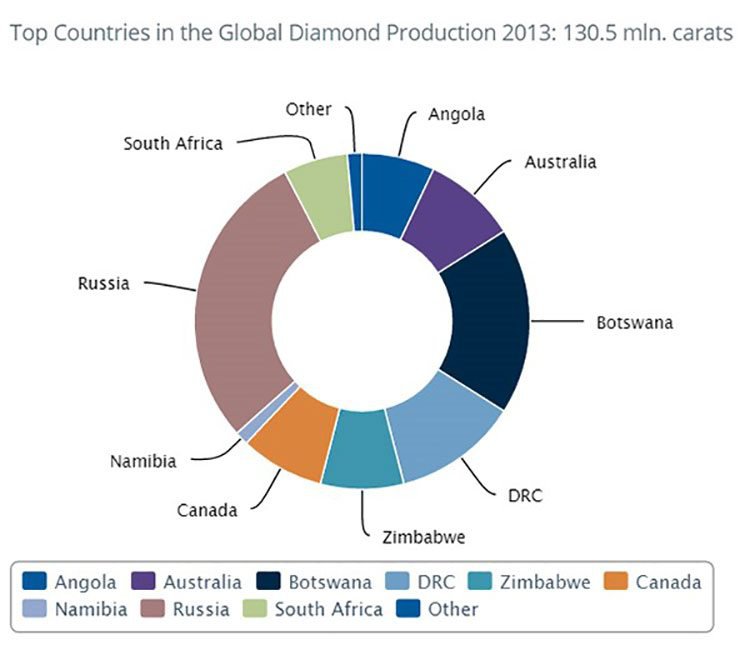 MED’s relatively low cost-structure, already proven from existing production, combined with the outstanding high-carat discoveries it has delivered indicates that MED will be a competitive diamond producer over time, potentially able to compete with gargantuan producers from Russia and Europe.

Overall this is an early stage play and as such any investment decision should be made with caution and professional financial advice should be sought.

Looking for friends in the world of diamonds

With so much opportunistic potential now coming back onto the table in the world of commodities, adding this sturdy diamond producer to your investment portfolio could be diversification-inducing, as well as lucrative.

MED’s inspired decision to upgrade its processing capabilities via XRT, provides an exciting opportunity for MED to recover diamonds that are larger than previously recovered in a cost-effective manner.

We’re not scouring for ready-made sparklers with a bit of polish and sheen. Instead, we’re looking intently at here at a diamond in the rough, which will hopefully become a polished ASX jewel in the years to come. 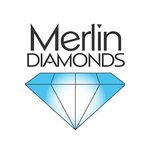 MED Ramps Up Mining: Has its Magic Been Missed by the Market?

Are Diamonds an Investors Best Friend? This ASX Stock Hopes So