All JORCed Up and Ready to Go: KSN Delivers Resource at Misima Gold Project

The verdict is in. Emerging ASX gold and lithium junior, Kingston Resources (ASX:KSN), has unveiled its maiden JORC Resource for the Misima Gold Project in Papua New Guinea (PNG).

As KSN revealed this week, this flagship Misima Project hosts a JORC Resource of 2.8 million ounces.

Compellingly, that represents a 22% increase in contained gold relative to the recent NI 43-101 Resource (a classification system that’s effectively the Canadian equivalent of JORC).

Coming as a hefty confidence boost to KSN shareholders, this Resource sets a new benchmark for exploration moving forward, tightening this ASX junior’s reins as it looks to hone in on a string of advanced exploration targets in the coming year.

This news comes hot on the heels of KSN’s recently completed merger with the Canadian-listed WCB Resources (TSX-V:WCB) — a game-changing deal that has placed in KSN’s grasp this gold-hued project, which is situated in an underexplored corner of PNG.

And the project’s appeal is more than validated with this latest piece of news. Combining its production history of four million ounces with this new JORC Resource of 2.8 million ounces, Misima now has a total known gold endowment that exceeds six million ounces.

This, in turn, positions the project as a world-class gold deposit in a region with confirmed precious metals mineralisation. Not a bad look for an ASX small-cap that’s only just getting started.

It should be noted here that KSN is an early stage play and investors should seek professional financial advice if considering this stock for their portfolio.

There’s also considerable scope here to substantially increase the contained ounces from drilling the near-mine extensions, focusing initially on outcropping mineralisation at the Umuna East and Misima North areas, both of which are regions outside the reported JORC Resource.

A sharply focused field exploration program has now recommenced at Misima, refining drill targets for 2018 — a plan that will make KSN extremely busy in the coming months.

Misima has an ample history, and was also for a time a site for copper exploration. The open pit was mined between 1989 and 2001, and the previous company, Placer, managed to produce the 3.7 million ounces of gold. However, when the gold price sunk to US$300 in 1999, Misima was closed down.

With gold now faring far more favourably, the fast-moving KSN could well be in exactly the right place, at a very good time.

KSN is currently valued at a miniscule $19.85 million, and this is really only just the beginning. This tiny ASX stock could be a salient entry point into the small-cap gold exploration corridor.

Catching up on the latest with:

We first introduced you to Kingston Resources (ASX:KSN) at the beginning of November with the article, Budding ASX Gold & Lithium Explorer Set to Complete Game-Changing Merger .

In that piece, we took an in-depth look at KSN’s now-completed transformative merger with WCB Resources, looking in detail at the Misima Gold Project itself, including the specs of its expansive history. We also walked you through the full spectrum of KSN’s portfolio, including the Livingstone Gold Project in WA, which holds a JORC 2004 Inferred Resource of almost 50,000 ounces, and the Bynoe Lithium Project in the Northern Territory.

Today’s article will focus primarily on the most recent development in KSN’s court: its newly revealed JORC Resource for Misima. But here are a few pertinent basics to bear in mind...

The Misima Project spans seven kilometres of strike, and is situated on Misima Island, some 625 kilometres east of Port Moresby in the Solomon Sea. Here’s where it sits: 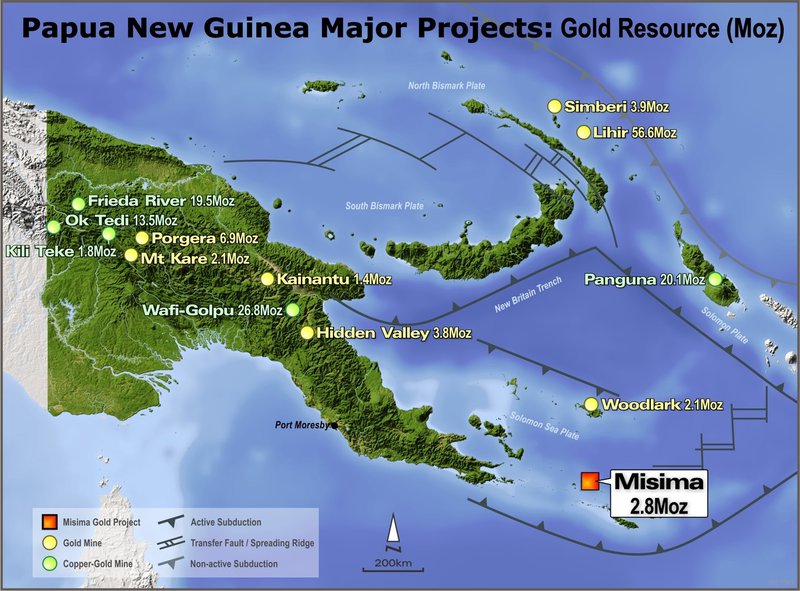 As you can see, Misima is surrounded by a cluster of majors, and is situated in a region with considerable upside potential, which we discussed in detail in our last article.

KSN currently owns 49% of this project, with earn-in expenditure of $1.9 million remaining to reach 70% ownership by March 31, 2019. And with $3.1 million cash in the bank, KSN is well-funded to complete this earn-in.

Misima’s history provides us with a compelling picture of what a future mining operation will look like here. As we’ve mentioned, the open pit at Misima was mined from 1989 to 2001, and the previous company, Placer, produced some 3.7 million ounces of gold.

Misima was a long life and low cost gold mine, driven by low strip ratios (low relative amounts of waste material) and a low cost milling operation. It also delivered 72% more gold than anticipated at the start of the operation.

A major reason for this low cost was the extremely soft, free-milling ore, which saw Misima milling up to 25% above nameplate during the Placer era, achieving 6.9 million tonnes per year, with life of mine recoveries of 91.7% gold and 48% silver. 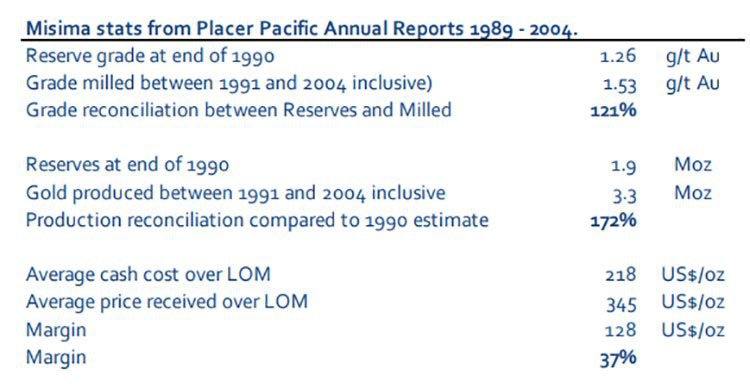 The mine was decommissioned in 2005, but with KSN’s merger now successfully completed and its maiden Resource delivered, this forward-focused ASX explorer now has a real chance to not only revive the mine itself, but to do so at a fruitful time for gold.

It does remain a speculative stock, however, so investors should take a cautious approach to any investment decision with regard to this stock.

Now, let’s move on now to the main event: the Resource itself.

You’ve got to be JORCing! the Resource nitty gritty

This most recent development on the Misima front came through in late November – only a matter of weeks after the finalisation of KSN’s merger. Not surprisingly, then, this piece of news had a positive effect on KSN’s share price, which is now trading at 2.0 cents.

This piece of news was covered by Finfeed.com on the day of the announcement... 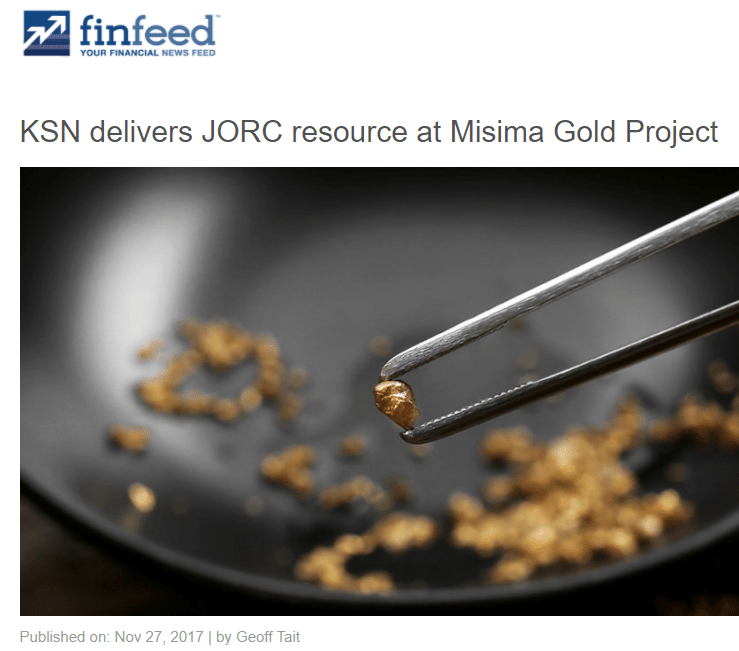 Encouragingly, that’s a 22% increase in contained gold relative to the previous NI43-101 Resource. 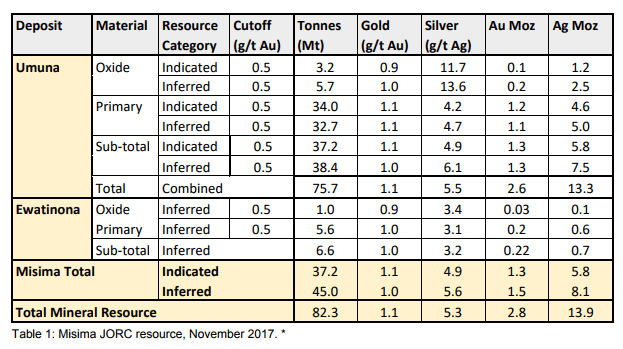 It’s worth mentioning that KSN’s new Resource total of 82.3 million tonnes at 1.1 grams per tonne of gold compares favourably to the historical 1986 pre-mining mineral inventory reported by Placer. Combining the historical 3.7 million ounces produced by Placer with KSN’s current Resource, Misima now has a total known gold endowment that exceeds six million ounces, making what KSN has in its hands a world-class gold deposit.

And this is where the combined Resource sits on the tonnage-grade curve: 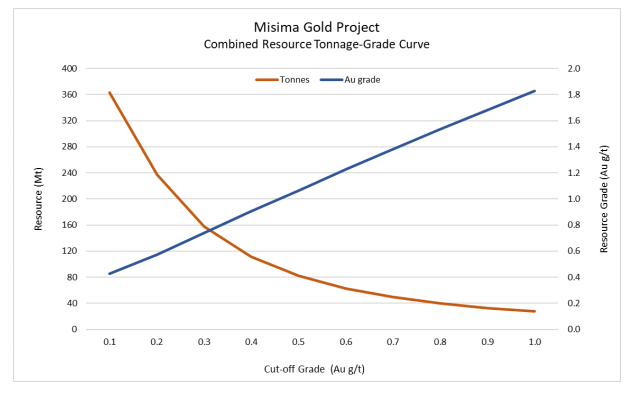 As we noted, Placer previously produced 3.7 million ounces of gold from KSN’s local area before mining ceased in 2001. With gold processing methods having significantly improved, this would be expected to have a positive effect on KSN’s ongoing work here, providing a strong foundation of economic viability.

This initial JORC Resource sets a benchmark for a forward-moving exploration plan.

Intriguingly, there’s also strong potential to substantially increase the contained ounces from drilling the near-mine extensions, initially focusing on outcropping mineralisation at the Umuna East and Misima North areas, which we’ll look at in more detail in a moment.

The Resource is open at depth, so there’s also strong potential to extend it down dip.

From the geological results seen so far, KSN reckons that there could be an additional 300-800 thousand ounces of gold (10-20 million tonnes at 0.8-1.2 grams per tonne gold) of mineralisation within the block model which falls outside its current Resource, but which is inside the interpreted zones of mineralisation.

In effect, it could be additional gold-bearing ore that sits within KSN’s exploration permit, but this has not yet been captured in exploration drilling efforts. This addition remains a theoretical possibility at this stage, but it’s something that KSN hopes to explore further in future drilling programs.

Moving forward, KSN’s primary focus for exploration, including planned drilling for early next year, will be the significantly underexplored Umuna East and Misima North areas.

Although these areas sit outside the current Resource and exploration target, they host extensive gold anomalism in both channel and soil sampling, and KSN believes that these areas show robust potential for additional near-surface mineralisation.

In the map below, which lays out the seven kilometres of prospective strike defined to date at Misima, you can see the priority target areas: 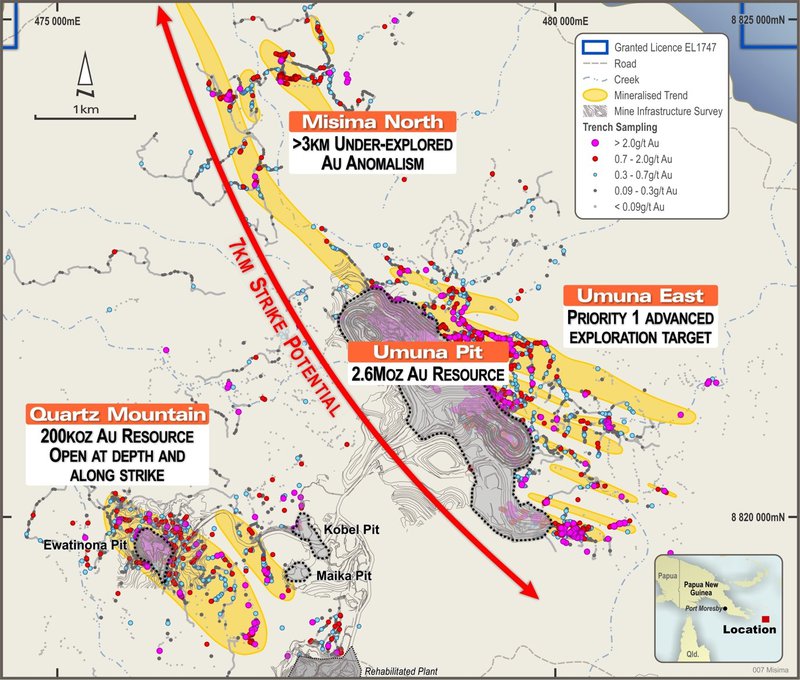 Field work has recommenced, with project manager, Charles Yobone, and project geologist, Kolbe Bare, now on the island as we speak, mobilising a team of local field technicians.

Both Yobone and Bare will be working closely alongside KSN’s newly appointed exploration manager, geologist Mike Woodbury, who has more than 20 years’ international exploration experience under his belt, including four years at Misima with the Placer Dome exploration team.

The immediate priority here is to recommence mapping and trench sampling on the mineralised splays in the Umuna East area, in order to infill previous data, determine continuity of mineralisation and define drilling targets for 2018.

Drilling will be targeting near-surface mineralisation proximal to the current Resource on the eastern side of Umuna pit.

Onward and upward for KSN

With sturdy potential to add to its newly defined Resource through ongoing exploration, KSN is in an excellent position to continue firming up its Resource base.

In turn, things are set to ramp up at Misima in the coming months as KSN embarks upon a series of tightly focused exploration works.

With its merger completed and its Resource now delivered, this is what KSN’s calendar looks like over the next few months and into the longer-term: 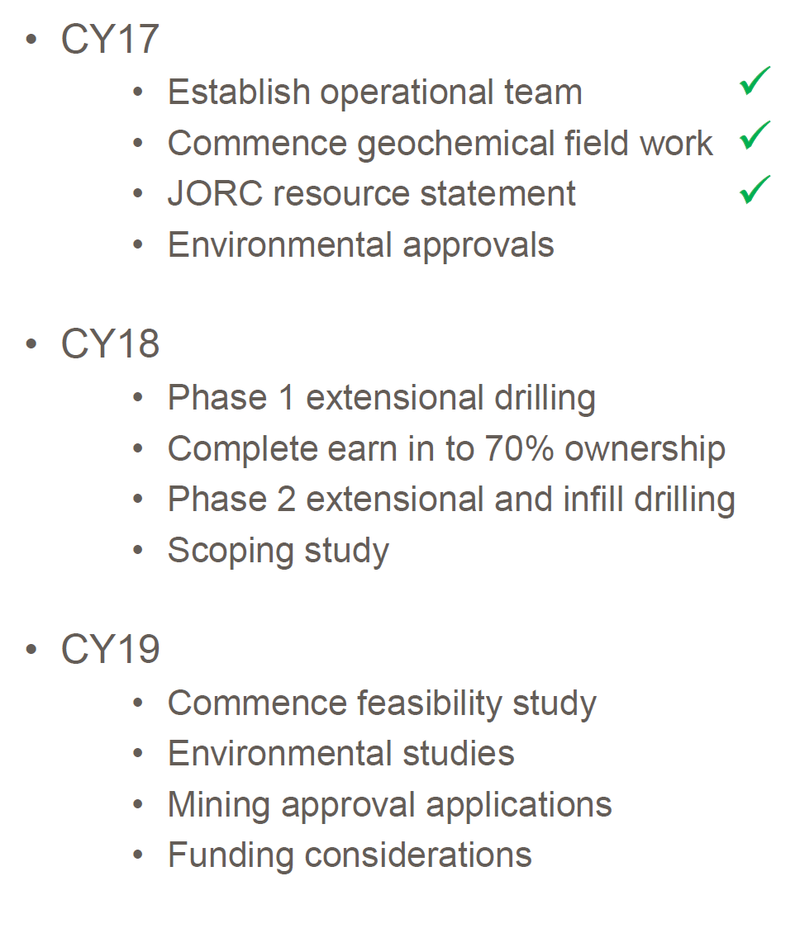 As you can see, KSN is looking to move quickly, and given the track record it’s already establishing in fast-tracking critical milestones – if its expedience in moving straight to the JORC delivery phase post-merger is anything to go by – time could go by very quickly indeed from here on in.

However, it is prudent to reiterate that this is an early stage play and investors should seek professional financial advice if considering this stock for their portfolio.

As it looks to build on its $19.85 million market cap, this proactive ASX gold explorer is a company that we expect to be tracking closely into the new year, and we’ll be sure to keep you in the know as things unfold.