We think today’s news from Province Resources (ASX:PRL) is significant enough that we can now officially call PRL our ASX Small Cap Pick of the Year for 2021.

... and the project has increased to 8GW (gigawatt) size - this would make it the fourth biggest green hydrogen project in the world.

Total Eren “develops, finances, invests in, builds and operates renewable energy power plants (solar, wind, hydro) worldwide” and is partly owned and branded by Total SA - one of the biggest global oil/energy supermajors in the world.

We will do a deeper dive on PRL in the coming weeks, but in the meantime, here is our quick take on today’s news.

PRL’s announcement says: “It (the project) will be equally owned (50/50) by Total Eren and Province with development of the integrated hybrid renewable energy capacity led by Total Eren”.

Our interpretation of this is that Total Eren will develop the wind and solar plant in return for 50% of the project, which we assume means they will pay for 50% of the cost too...

In its announcement from Feb 17th 2020, PRL said in its 18 month plan it would look to execute an MoU with a partner - but we certainly weren't expecting:

When PRL first announced its green hydrogen project on the 17th of Feb this year we said that the project was still early stage but we think it could be our 2021 Small Cap Pick of the Year if PRL can make a few more announcements that we felt would derisk the project.

We think today’s news is significant enough that we can officially call PRL our ASX Small Cap Pick of the Year for 2021.

We have been invested in PRL since mid 2020. When they announced its entry into hydrogen in February 2021, we were very impressed (and so was the market).

Today PRL has confirmed the signing of a BINDING Memorandum of Understanding (MoU) with Total Eren, to develop a potential 8GW Green Hydrogen Project.

At 8GW, this would make PRL’s Green Hydrogen Project the fourth largest in the world (according to this list).

Total Eren is a partially owned subsidiary of the seventh largest oil company in the world, the €100BN capped Total S.A.

Big oil knows it needs to change to keep up with the changing world. Oil supermajors and their big balance sheets are moving rapidly into renewables, and it’s a great sign that one of the biggest oil companies in the world wants to partner with PRL to deliver PRL’s project.

Today’s Binding MoU with Total Eren is a significant de-risking event for PRL and establishes the company’s pathway to developing its Green Hydrogen ambitions.

Scoping Studies and Definitive Agreements are expected in the next 4 months.

Potential Value of the Binding MoU and next steps

We have had a look at a number of green hydrogen projects in development around the world, and a very rough calc shows the cost per GW is $1.5-2BN per GW of installed capacity.

Now its very early days for PRL and Total Eren, but in order to get an order of magnitude, we can assume it will cost about $12BN to bring an 8GW project online - Net Present Value and project investment returns will be revealed and refined as the project moves through Scoping Study through to feasibility studies.

If PRL can execute this agreement with Total Eren we would assume that Total would be paying for their 50% of the entire cost - this will be a significant de-risking for the project for PRL investors.

PRL could then farm out a further part of its 50% to find the other half of the financing - leaving PRL free carried on the fourth biggest green hydrogen project in the world OR...

There is also a rapidly emerging market globally for “green bonds” - money that is looking to be loaned out to finance green projects. These bonds expect to earn an interest and be repaid on maturity, which means this financing is non dilutive to existing shareholders.

[We got this wrong, read the clarification that the binding MoU with Total Eren is actually way better than we first thought]

So whilst it is early days for PRL, and we don't yet know the full strategy, it appears that there are a number of funding pathways that will be available to the company.

Here is all our past commentary on PRL, including from when it used to be called Scandivanadium. 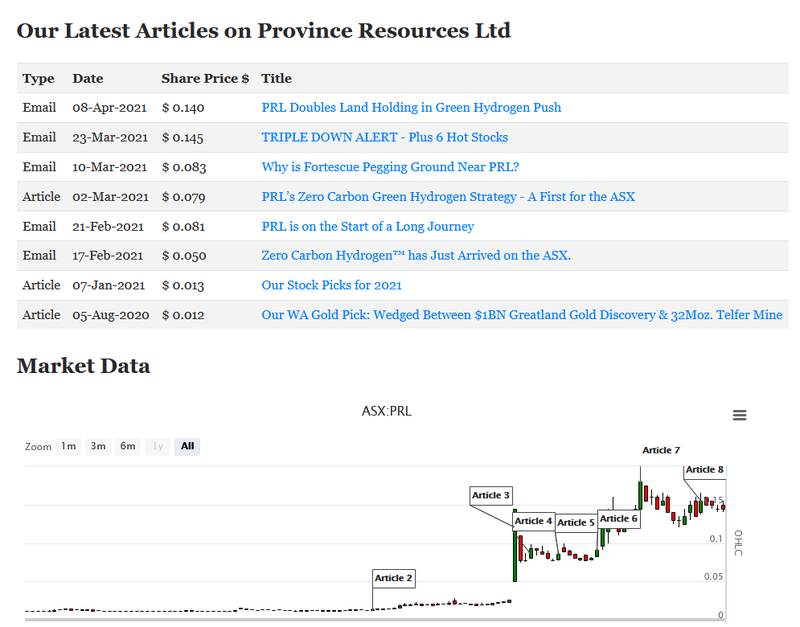 If you are new to investing, please make sure to read our ebook “How to Invest in Small Cap Stocks”