The emerging explorer has now completed a total of 38 holes for 2408 metres, with the campaign focused on increasing known mineralisation at Kat Gap — which CLZ has delivered in spades, with its best ever high-grade gold intercept from shallow depth.

In short, Kat Gap is shaping up as a near-surface, high-grade gold deposit with plenty of upside potential — especially given that CLZ has only tested some 160 metres of 35 kilometre strike along this granite-greenstone contact.

Drilling at the Lady Magdalene deposit, meanwhile, has yielded even more fruitful results for the company, further confirming the presence of high-grade cross-cutting quartz veins previously missed due to drilling being too wide-spaced.

What’s really interesting is that, as CLZ hypothesised, these quartz veins could be analogous to those at the Lady Ada prospect — reinforcing the view that further high-grade ounces are hiding between the existing drill lines.

On top of that, work at the Lady Lila deposit has continued to extend mineralisation along strike. It now extends over 100 metres within the system, which is hosted in a Banded Iron Formation (BIF), open in all directions.

Encouragingly, each drill site is open along strike and merits follow-up.

CLZ will restart drilling at all three prospects towards the end of the month. This program will also include follow-up drilling at the Van Uden West prospect, so expect plenty of news flow from this sharply focused junior.

What’s more, all of this comes at a time when gold prices look to be on the up. Kitco this week called the bottom, reporting that gold selling had halted. Intensified geopolitical instability, coupled with mounting concerns around financial and economic stability, could well see renewed demand for gold as safe haven — and right at a time when CLZ is unearthing bonanza grades of the stuff.

That’s the gold part of the equation, and CLZ’s highest priority. But there’s also a battery metals story here adding some forward-focused diversification.

Creasy has applied to convert his Silver Knight tenement into a mining lease, suggesting that the deposit is economic and expected to grow.

With that in mind, CLZ has revised its exploration target and overall strategy at Fraser Range to unlock the value of this early-stage project. Moving forward, the company will allocate funds to explore new priority targets with significant potential within a major regional conductive target zone.

With Independence Group’s (ASX:IGO) geologically similar Nova-Bollinger nickel-cobalt deposit 45 kilometres along strike to the southwest, and Creasy’s Silver Knight deposit less than 10 kilometres to the south, the time is clearly ripe for CLZ’s Fraser Range Project.

CLZ is currently valued by the market at just $12.5 million, with plenty to look forward to in the weeks ahead as it resumes drilling at Forrestania and homes in on several high-priority targets.

Keeping you in the know with:

Since we last caught up with Classic Minerals (ASX:CLZ) in July, the resourceful junior explorer has continued to deliver the goods at its Forrestania Gold Project.

This is where CLZ’s holdings sit:

As we explored in our last update, CLZ has partnered up with Australia’s federal scientific research outfit, CSIRO, to examine the potential link between tree size and gold mineralisation at Forrestania.

The following CSIRO article explains more around this theory: 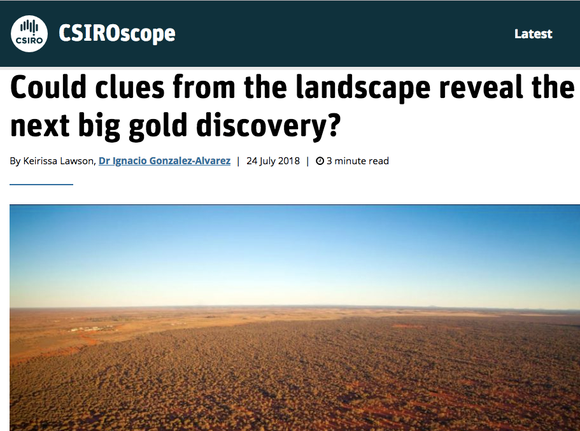 CLZ is hoping this six-month research program will enable it to better understand the local geology, and to assist in more rapid, non-ground disturbing exploration and target generation.

Forrestania has an existing JORC Mineral Resource of 5.3 Mt at 1.39 g/t for 240,000 ounces of gold, while a scoping study was completed last year indicating the technical and financial viability of the project.

While gold is the central focus here, the project also hosts lithium-bearing pegmatites, whose potential CLZ also been investigating — something that adds extra heft to CLZ’s recently reinvigorated cobalt-copper-nickel asset in the Fraser Range.

Further exploration at both Forrestania and Fraser Range will be supported by the $1.8 million that CLZ raised back in August.

CLZ has an 80% interest in the gold rights of the Forrestania Project (excluding Lady Lila and Kat Gap, of which it holds 100%), while Hannans Limited (ASX:HNR) holds the remaining 20% interest.

CLZ also owns a 100% interest in the non-gold rights on the Kat Gap and Lady Lila tenements, including nickel, lithium and other metals.

With those scene-setting specs in mind, let’s take a look at the most recent assays to come out of Forrestania...

All that glitters in Forrestania

The latest results from CLZ’s RC drilling program at Forrestania have delivered a confidence boost to shareholders.

We’ll get into more detail in a moment, but here are some drill highlights (note the high grades): 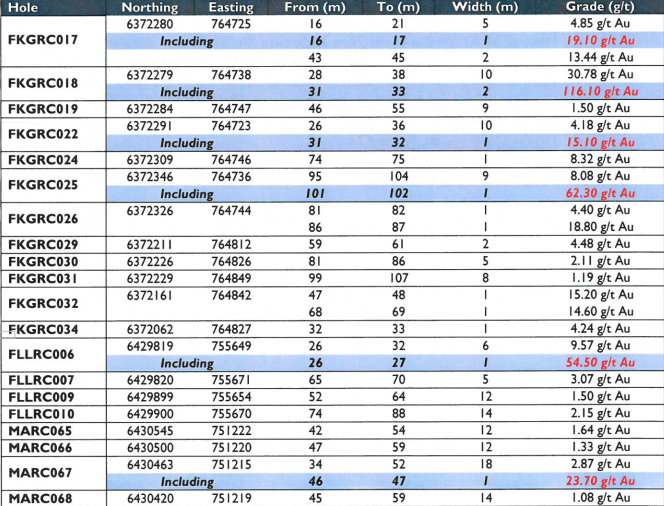 The high-grade zones of mineralisation encountered at each of the drill sites merit urgent follow-up, and all are open along strike.

Below, CLZ’s Forrestania tenure is shown in red, including drill targets: 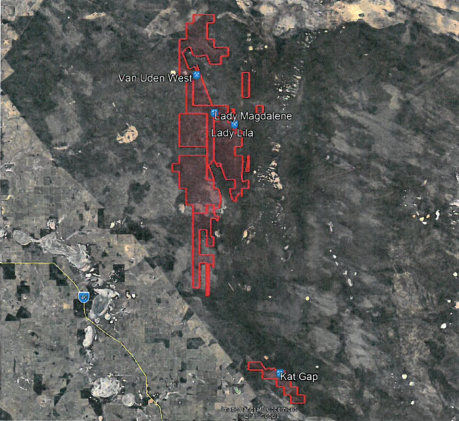 During this round of drilling, CLZ returned significant gold grades for Kat Gap from 12 of the 18 holes completed. Impressively, Kat Gap has returned its best-ever high-grade gold intercept from shallow depth.

Best results from the most recent drilling include: 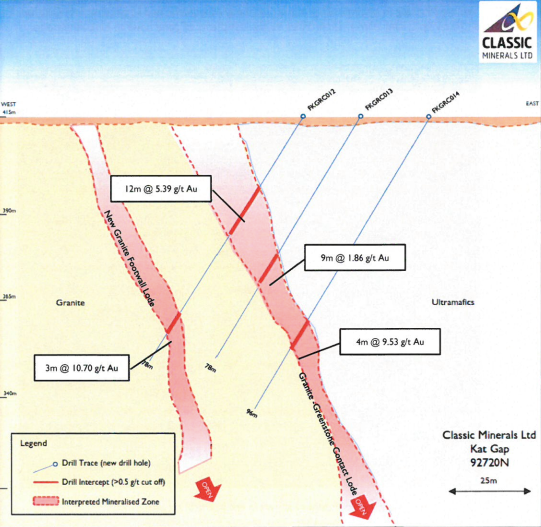 The majority of the recent drilling at Kat Gap was focused on testing the main granite-greenstone contact, which has been the main focus since the prospect was discovered by previous holders. Mineralisation is open in all directions.

Kat Gap shows considerable promise as a near-surface, high-grade gold deposit with plenty of upside potential — especially considering that CLZ has only tested 160 metres of 3.5 kilometres of strike along this granite/greenstone contact.

There’s a lot to suggest that CLZ is only scratching the surface here.

The prospect offers strong potential for additional mineralisation to be identified up-dip, down-dip and along strike, both outside and within the existing RC drill coverage.

On top of that, only about half of the five kilometre long >50 ppb gold-in-soil anomaly has been tested by RC drilling along the granite/greenstone contact. This could all translate into considerable exploration upside for CLZ.

CLZ has already planned follow-up RC and diamond holes with drilling scheduled in the remaining weeks of October.

Below, you can see the strike length that will be tested in follow-up drilling: 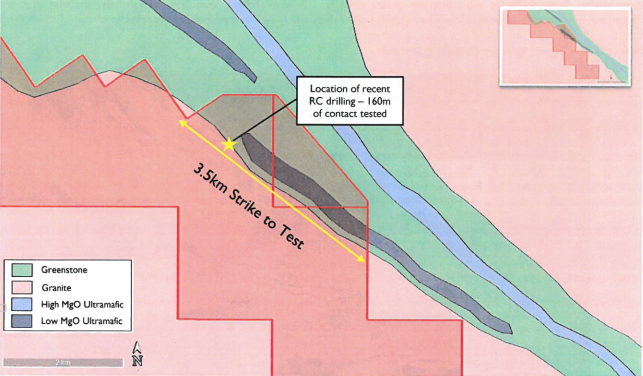 These are similar in orientation to the high-grade Lady Ada deposit, which lies 600 metres to the south, suggesting that substantially more high-grade ounces are waiting to be found between the existing drill lines at Lady Magdalene.

CLZ drilled five RC holes for 454 metres on one north-south oriented traverse, following up on encouraging results from the last drilling campaign. Of those five holes, two intersected quartz veining in a potential east-west orientation.

Better assays from the new quartz veins include:

Below, you can see the latest drill holes at Lady Magdalene shown in white and interpreted high-grade quartz veins shown in yellow: 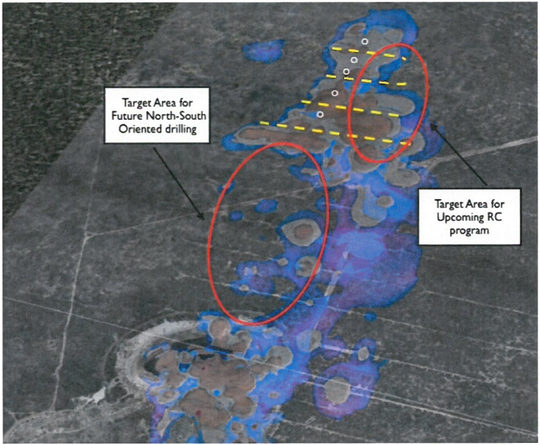 Step-out drilling along strike both north and south from historical RC holes has returned further encouraging results at Lady Lila, which is situated four kilometres east of Lady Ada.

Five holes for 366 metres were drilled at Lady Lila, and all intersected gold mineralisation.

Mineralisation now extends over 100 metres with the system, which is hosted in a BIF and open in all directions.

Importantly, as with Kat Gap and Lady Magdalene, mineralisation remains open at depth and additional follow-up drilling is planned to continue to amplify this deposit.

A typical cross-section of Lady Lila: 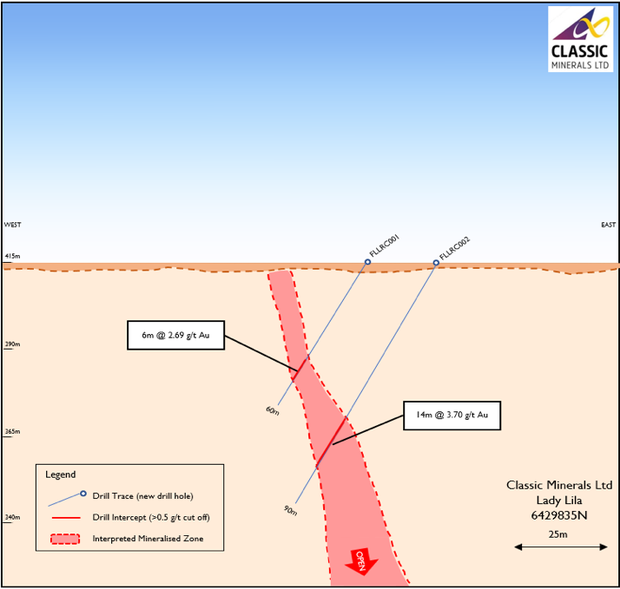 The present gold mineralisation models indicate a steep easterly dip. Future drilling will test a potential vertical dip, bearing in mind that gold deposits in the area, such as the Bounty and Blue Vein deposits, have been known to steepen at depth.

Moving forward, CLZ has plans to restart drilling before the month is out at Kat Gap, Lady Magdalene and Lady Lila, as well as conduct follow-up drilling at Van Uden West. This is likely to translate into plenty of news flow from CLZ.

Meanwhile, on the Fraser Range...

While CLZ’s chief focus remains Forrestania gold, its Fraser Nickel-Copper-Cobalt Project is now back on the agenda... just as the region is experiencing a resurgence.

The Fraser Range region shot to fame back in 2012 with Sirius Resources’ Nova-Bollinger discovery, which is now owned by Independence Group (ASX:IGO) after it acquired Sirius and Nova-Bollinger for $1.8 billion.

CLZ’s renewed interest in this project has been sparked by the recent Silver Knight discovery by Creasy’s Great Southern Nickel.

There’s speculation that the Silver Knight discovery, which is located less than 10 kilometres north of CLZ’s tenements, could be at least one-third the size of the 2012 Nova-Bollinger discovery.

Creasy, moreover, has applied to convert the Silver Knight tenement into a mining lease, suggesting that the deposit is economic and expected to grow — something that bodes well for CLZ. 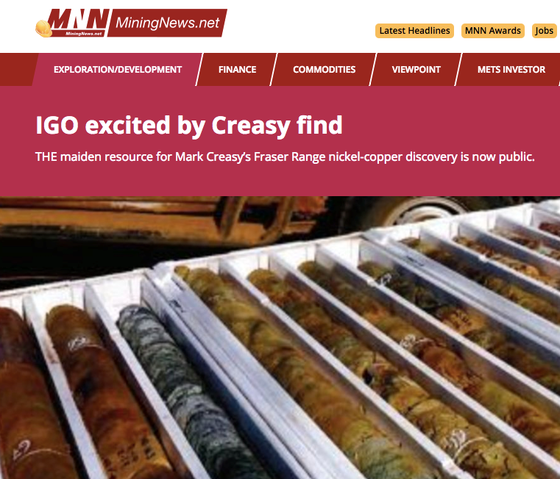 Interestingly, Creasy also played a key role in discovering the Nova-Bollinger nickel-copper deposit, which is only 25 kilometres from Silver Knight.

IGO’s Nova operation has been in production since July 2017, and is running at its nameplate 1.5Mt/y mining rate. Nova produced 22,258 tonnes of nickel, 9545 tonnes of copper and 740 tonnes of cobalt in the 2018 financial year.

With that in mind, CLZ has revised its exploration target and overall strategy at Fraser Range to unlock the value of this early-stage project. The company is planning follow-up work at priority exploration targets, following a review of the project data set.

With both Nova-Bollinger and Creasy’s Silver Knight deposit practically rubbing shoulders with CLZ’s project, now is a very good time for this emerging explorer to revisit the Fraser Range.

You can see how close CLZ’s project (in red) is to both of these discoveries — and a number of others — in the map below: 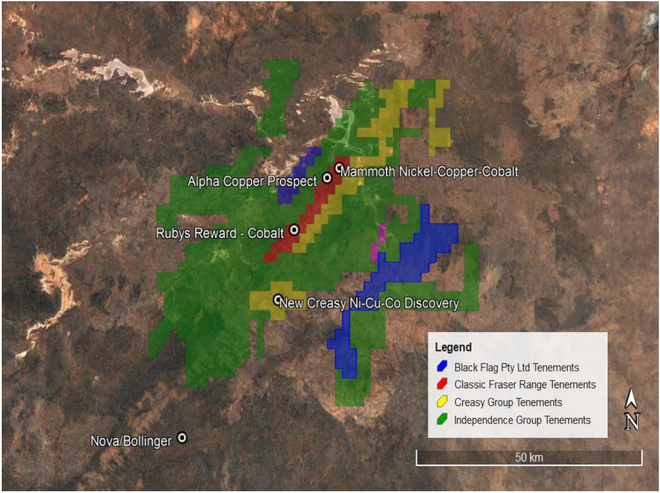 With this encouraging nearology in mind, CLZ will allocate a portion of exploration expenditure to begin follow-up of some intriguing priority targets — including the Mammoth nickel-copper and Alpha copper prospects.

Also of interest is the ‘eye’ structure CLZ has identified here through magnetic survey. A similar structure originally led to the discovery of Nova-Bollinger.

MLEM, FLEM and geochemical sampling over the whole feature is being planned to assist with drill targeting.

Hitting all the right notes

As CLZ plunges straight into follow-up drilling at Kat Gap, Lady Magdalene and Lady Lila towards the end of October and further investigates its Fraser Range Project, there’s plenty to look forward to from this ASX small-cap.

The company’s collaborative study with CSIRO could also deliver some golden opportunities along the way.

All in all, this $12.5 million-capped junior is making excellent progress across its assets, with ample future upside to be had, and we can’t wait to see what it does next.