BHP CEO Mike Henry announced this week that he would look into expanding into commodities required for a shift to a low-carbon economy.

Specifically, BHP will soon be in the market for what Henry calls ‘future facing’ metals.

“We need more copper and we need more nickel,” Henry told reporters. “We do have some growth ahead of us in both of those commodities but if I think to the far future we’d like to have more options.”

BHP is amongst many mining majors leading the trend towards low carbon or carbon neutral commodities and practices.

While iron ore is still a major component of BHP’s net profit – that was up 39% on the year in FY19 – BHP is certainly looking to the future.

“We must create more options in future-facing commodities to help us continue grow value. These options will come from both within our existing footprint as well as through securing more resources through exploration and early stage entry,” Henry said.

Notably, BHP increased its total copper production at Olympic Dam in 2019 by 7% over the previous year to 885,000.

Copper could soon be the metal of the moment.

It is certainly in demand and is a commodity that fits nicely into Comet Resources' (ASX:CRL) overall battery metal strategy, which began with the 100% owned Springdale Graphite Project in WA, as it too looks to charge into the carbon neutral space.

Comet delivered outstanding exploration results at Springdale late last year. This was not only good news for shareholders, but also fortified its strategy of finding strong assets that feed into the battery metal, electric vehicle, carbon neutral conversation.

As work progressed at Springdale, Comet had an eye out for further assets that met its battery metal criteria.

Specifically, it looked at another Tier-1 located project to diversify its asset base, while strengthening its foothold in the battery electric vehicle (BEV) space.

That project is the Barraba Copper Project, located in NSW and encompassing areas of the Peel Fault zone which hosts the historic Gulf Creek and Murchison copper mines.

Barraba has a number of drill ready targets, which Comet will explore as soon as the acquisition is complete.

Comet will fast track exploration at Barraba with a proposed initial 1,500 to 2,000 metre drill program to be carried out early to mid 2020.

The great upside here is the Barraba Project has not been explored using modern integrated geophysics and exploration techniques (IP, downhole EM, drilling), which will form part of Comet’s initial exploration program.

The Barraba acquisition is set to give Comet a dual run at the growing BEV market: it is now exploring for two in-demand resources in highly prolific areas within Tier-1 jurisdictions. 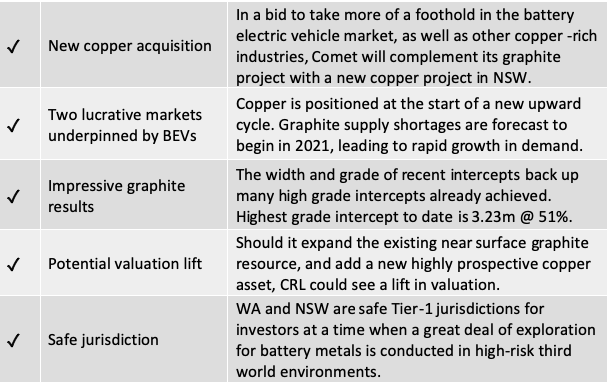 The electric vehicle market is expected to be worth $29 billion by 2022. The growth in this market is being driven by a global effort to reduce our carbon footprint – leading to a full blown push towards the electrification of the global transportation system.

As discussed above, the likes of BHP are now turning their attention to exploring for carbon neutral commodities to meet the needs of electric vehicle manufacturers and other carbon neutral innovators.

Copper is at the forefront of these commodities.

An electric vehicle contains four times as much copper as your basic, everyday automobile. The adjuncts to the BEV car boom, the residential and public charging stations, also require significant amounts of copper.

To put that in perspective, a single residential charger uses about 2kg of copper, that’s 42 million tonnes, or double the current amount of copper mined in one year.

Like BHP, ASX small cap Comet Resources (ASX:CRL) is also looking to lead the way in this trend and is set to acquire its own highly prospective copper play.

Comet is set to acquire an initial 80% of the Barraba Copper project in NSW. The acquisition moved one step closer to completion this week, following the company’s $2 million capital raise – a key condition of purchase.

Conditions of the acquisition require the battery metals explorer to spend A$600,000 on “in ground” exploration over 18 months to earn its 80% interest in the Barraba Project. Comet then has an option to acquire the remaining 20% for A$2.5 million in the first 36 months.

The company will now seek shareholder approval to finalise the deal and providing there are no barriers, will fast track its exploration program.

“The strong support for this capital raising is a great endorsement from investors for the Barraba Copper Project acquisition and Comet’s evolving strategy. We’re already planning an active exploration program for Q2, including an initial drilling program,” said O’Kane.

The Barraba Copper Project is a 2,375ha exploration license that covers the project area, EL8492 and is located approximately 550km north of Sydney. Gulf Creek produced high-grade copper and zinc for a short period around the 19th century, and it is this area that will form a key part of Comet's initial exploration focus.

During its due diligence period, Comet found the Barraba Project hosted a number of exciting drill targets both at depth and along strike from Gulf Creek. These targets are prospective for VMS potentially rich in copper, other base metals and precious metals – something the area is well known for.

Further upside is that there has been very little work done at Barraba in the past and the project has never been systematically tested using modern exploration techniques. Comet will utilise much more effective tools in its approach to this project area.

Comet’s initial exploration program will include drill testing of areas below historically identified deposits, along with high-level exploration targets delineated by an induced polarisation (IP) survey of parts of the license area that were never followed up.

The company will also complete downhole geophysics that it believes will provide additional information about potential parallel and blind lodes, in addition to the known historical lodes.

A fast-tracked program can be expected once the acquisition is complete, consisting of a proposed initial 1,500 to 2,000 metre drill program to be carried out early to mid 2020.

Copper fits nicely with Comet’s overall battery electric vehicle strategy that began with its Springdale Graphite Project. Copper is a commodity that is just as important, if not more important, than other metals required for this space.

The good thing for Comet is that copper is projected to be at the start of a new upward cycle: 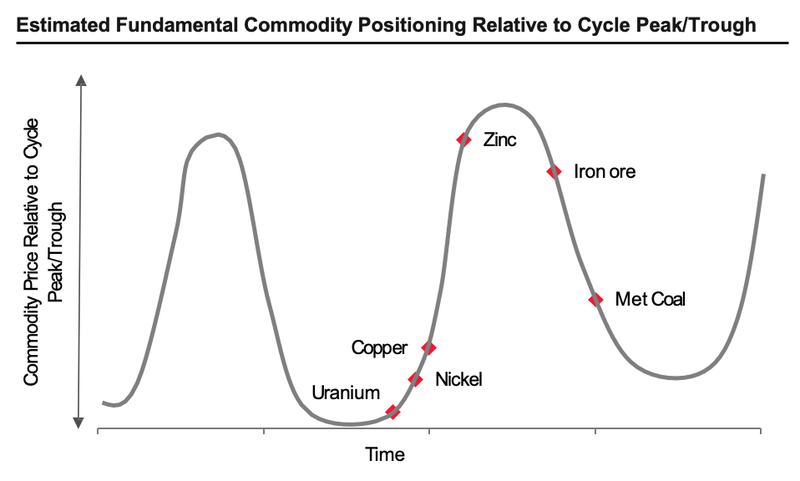 And supply deficits are expected by 2024. 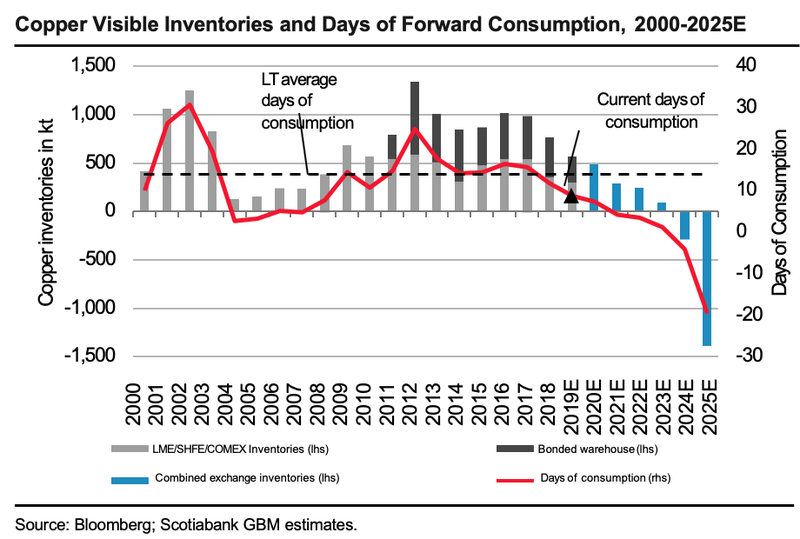 The following video explains these deficits in more detail and how copper will be used to transform vital industries including car manufacturing and transportation:

Comet is of the opinion, one shared by many analysts and market experts, that copper is set to see an increase in demand due to the global efforts to reduce emissions from the transport network and also from generation of renewable electricity – a point made in the above video.

Interestingly, when we think about electric vehicles, we think about the resources required to power the motors. However, there is much more to the production of EVs than meets the eye.

The above article suggests that among electrical devices that use copper are computers, televisions, circuit boards, semiconductors, microwaves and fire prevention sprinkler systems.

It’s a multi-purpose metal that just happens to be coming into higher demand as EV production ramps ups.

According to S&P Global Market Intelligence, the forecast supply deficit of 5.7 Mt p.a. by 2030 is approximately 28% of estimated demand. In other words, there is not enough copper being discovered to meet demand.

Copper and graphite – a great mix

Comet began its BEV play with the acquisition of the Springdale Graphite Project as it looked to take advantage of rapid demand growth for graphite. 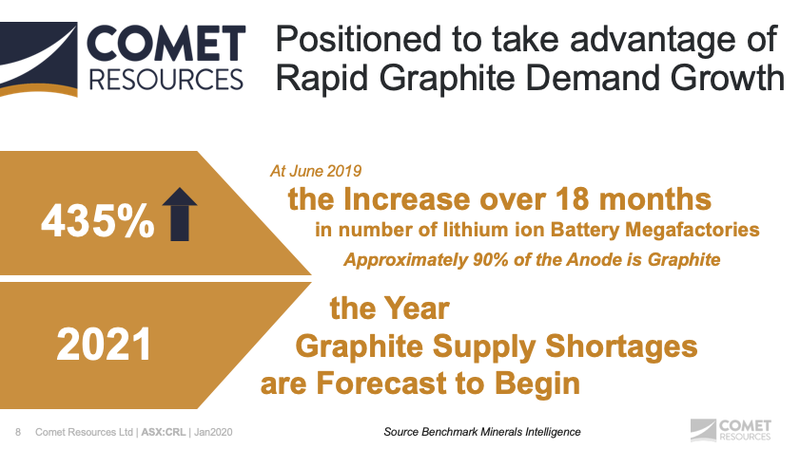 There was a 453% rise in the number of lithium-ion battery megafactories in the 18 months to June 2019. Approximately, 90% of the anode in these factories is graphite.

The number of megafactories will continue to rise as the demand for BEVs increases. This will lead to a shortage of graphite, estimated to kick in in 2021.

Companies that are producing high grade graphite, could be sought after for their supply. 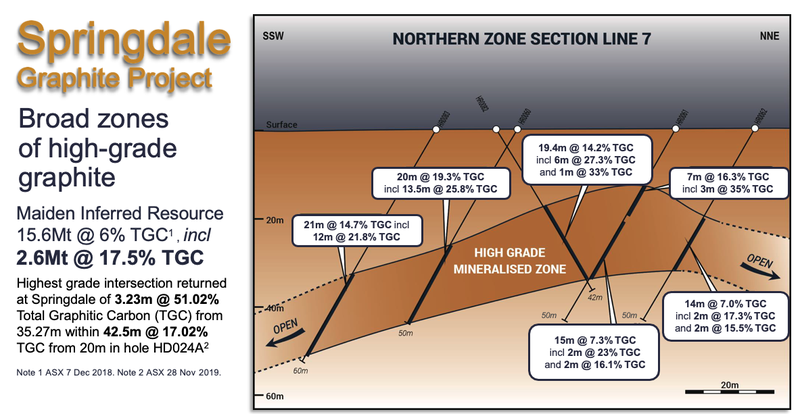 Extensive coverage of this graphite project can be found in our previous article: High Grade Graphite Results Just the First Catalyst to Come for This ASX Junior.

Here is CEO Matt O’Kane speaking with the Market Herald about the Springdale graphite project, its resource and the potential to attract offtake and other partners:

The Springdale Graphite Project was the first in Comet’s arsenal of BEV-focused projects, the second is the Barraba Copper Project.

Should the Barraba acquisition be completed in a timely fashion, Comet will be exploring for one of the most sought after metals in the world at a time when copper, like graphite, is experiencing heightened demand and low supply.

WhiteHawk
ASX:WHK
Initial Investment
May 2019
Up as high as
517%
Read the analysis
We increased position in
Jun 2019 - Read more here