When we last wrote about the UK company Armadale Capital PLC (AIM:ACP), it was pushing towards a Definitive Feasibility Study that would set their flagship Mpokoto Gold Project on track to enter production as a low cost, high grade gold producer in early 2016.

Since then, the 678,000oz Project in the Democratic Republic of Congo (DRC) has continued to advance at pace towards commercial production.

ACP expects to begin construction at the Mpokoto gold project in the New Year, subject to receipt of financing and is undertaking additional metallurgical testing in the fourth quarter of 2015 to further optimise its processing routes for gold recovery.

While awaiting the metallurgical results, siteworks at Mpokoto have commenced with the detailed survey of the tailings dam and ground water drilling underway.

In a global environment that is looking positive for this precious metal, ACP seems well placed to capitalise should it achieve its aims of a production rate of approximately 25,000 oz. p.a. (225,000 tonnes total) of gold over the initial nine year life of the mine.

Now, given this project is situated in the Democratic Republic of Congo (DRC) and ACP is capped at around £4M, this is a high-risk stock. Tenure security, as well as graft and corruption can play a part in hindering Congolese projects from advancing, and contribute to the political risk.

Whilst a speculative stock, fundamentals are in place to drive ACP forward:

For those unfamiliar with UK company Armadale Capital (AIM:ACP), here’s a quick recap.

ACP has a current market cap of a tick over £4 million, and is an investment company focused on natural resources in Africa with its main emphasis being the Mpokoto gold project in the Katanga Region of the DRC.

ACP holds an 80% interest in the Mpokoto Gold Project and also holds a 36% interest in Mine Restoration Investments Ltd, a South African listed company, which is in the process of acquiring an interest in an iron beneficiation company in South Africa.

Drilling at the Mpokoto project site

But all the focus in ACP right now is its gold project in the Kantanga Province of the DRC. The Katanga Province is home to the famous ‘Copper Belt’ and some of the world’s richest copper deposits is amongst the most stable of areas in the DRC.

At the same time, the country can be unstable, and this adds to the political risk for ACP – success is no guarantee here.

In an effort to try and mitigate these risks, ACP has tied up a local partner to assist with funding and construction of the mine.

This will allow for the inclusion of results of final metallurgical work and further input from mining contractor Africa Mining Contracting Services group (A-MCS), which should positively enhance results of the DFS.

The US$20 million to be invested in ACP by A-MCS includes provision of finance to fund the plant and power plants; and a mining contract to govern provision of mining services moving forward.

Having recently defined a two phase process route for gold recovery, ACP believes there is potential to further optimise these results through additional metallurgical test work.

“We believe the results from this will favourably impact the projected economics of the project, which are already extremely competitive with estimated cash costs of $647/oz. and an NPV of $32.3 million,” said ACP Chairman Peter Marks.

“We continue to progress our very constructive engagement with A-MCS, who are providing active input to the DFS process as well as the necessary framework to conclude our financing agreements, which will bring with it up to US$20 million of financing. With additional upside available, Mpokoto maintains its status as a low capex, low opex gold mine,” Marks concluded.

Further to the $20 million provided by A-MCS, ACP also raised £700,000 via a recent placing . The proceeds of the Placing will allow Armadale to continue the development of its Mpokoto Gold Project by commencing ground works in conjunction with drilling. This includes the completion of the DFS.

“Having recently raised £400,000, we are delighted to have further bolstered our cash balance with this £700,000 Placing,” said ACP Director Justin Lewis back in August 2015.

“The funds raised will support the continued rapid development of our Mpokoto Gold Project, which is on track to commence commercial, low cost gold production in H1 2016. We are optimistic that the results of the DFS, will further enhance our already favourable Project economics, which includes a Net Present Valuation of US$32.3m based on a forecast gold price of US$1,100/oz.”

Four to the core

At the same time, this is planned production only, and there are a few more hurdles to pass before this begins – and it is always recommended that investors seek professional advice before investing.

A drilling programme has already been proposed and planned which targets high-grade, primary mineralisation (Intersected in MPDD0064) below the presently planned pit. The project is part of a substantial 800,000 hectares of exploration licences yet to be explored.

The heads of agreement that ACP signed with A-MCS back in June has seen the African contractor work with ACP and its principal consultant, Bara Consultants to navigate the Mpokoto project through the DFS.

The HOA is part of a defined development strategy to rapidly advance the Project through to low capex, low opex gold production by the second half of 2016.

“We are working closely with our partners to finalise the DFS and the definitive agreements to deliver a low cost, low capex mine capable of generating excellent returns for shareholders,” said Justin Lewis.

Though the region is considered volatile, it has not dampened the enthusiasm of miners in the area who believe they are onto a good thing.

This is the area: 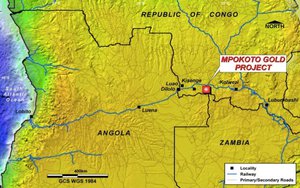 And this is the good thing: 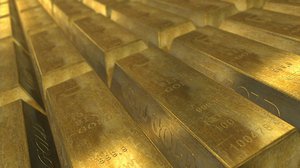 ACP’s Project has been explored extensively in the past.

Consequently, there is a solid understanding that exists of both the regional and local geological setting. This is partly due to the long exploration history and historic mining of manganese in the area.

Further confidence is garnered from Mine Restoration Investment Limited’s (MRI) involvement in the region. This South African investment company entered into a memorandum of agreement to acquire up to a 39.2% interest in Iron Mineral Beneficiation Services Proprietary Limited (IMBS). Along with the acquisition MRI is planning to raise ZAR200 million (AU$20.4m) through a private placement of MRI shares at ZAR0.07 per share.

The good news is that ACP currently holds almost 250M MRI shares which at ZAR0.07 per MRI share, values ACP’s investment in MRI at approximately ZAR17.5 million. ACP has been actively looking to realise its investment in MRI, believing this proposed acquisition and fundraising will strengthen shareholder value.

There are bigger players still.

Mining major Glencore Xstrata (market cap $17.44B) first invested in the DRC in 2008 and today has shareholdings in Katanga Mining Limited (KML).

KML owns 75% of the Kamoto Copper Company (KCC) and Mutanda Mining SARL (Mumi), with copper assets spread across the African Copperbelt, one of the world’s most important copper producing regions.

A report by KPMG details the high risk, high rewards to be gained from the area and why it has been so popular and there is certainly much to think about.

The KPMG report on this region states:

“The country has a unique position with substantial untapped gold, cobalt and high-grade copper reserves, but equally significant are the political and security risks accentuated by a lack of robust infrastructure.

The DRC is the largest producer of cobalt globally, accounting for about 55% of the global output in 2012 according to the US Geological Survey (USGS) Mineral Commodity Summaries 2013 report. It was the second largest producer of industrial diamonds in 2012, contributing about 21% of global production behind only Botswana, which accounted for about 31% of global industrial diamond output.

Furthermore, the country boasts some of the highest quality copper reserves globally, with some of the mines estimated to contain grades above 3%, significantly higher than the global average of 0.6% – 0.8%. International mining companies attracted by high grade and low cost mines, may be increasingly attracted to the DRC’s copper wealth situated on the Copperbelt in the Southern part of the country.

In turn, with operating costs that are lower than traditional gold producing countries like South Africa, DRC’s gold mining sector is also witnessing renewed interest from mining companies. The Kibali gold project being developed by Randgold Resources is estimated to be the largest undeveloped gold mine in Africa with about 13 – 14 million ounces of gold reserves.”

The picture as to why ACP is focusing on the region is now a little clearer.

Whilst the DCR is not a place for the feint hearted, explorers in the region literally look set to strike gold – with ACP advancing fast toward production.

ACP’s review of metallurgical test work supports the development of a planned process route for gold recovery at the Mpokoto gold project. And a production rate of about 25,000 oz/y of gold over an initial nine year mine life of mine is targeted to commence in first half 2016.

ACP will be active in the coming 6-12 months as drill results, exploration work and a DFS become the key catalysts going forward. And with a partnership deal agreed with A-MCS, there is a certainty that production will commence next year.